A Season in Hell (A Tennessee Smith Western #2) (Mass Market) 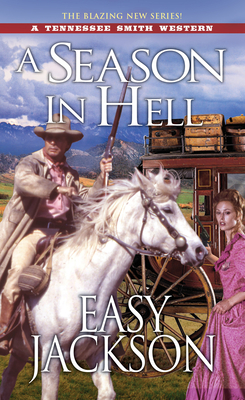 By Easy Jackson
$8.95
Not Available

This is book number 2 in the A Tennessee Smith Western series.

It’s hard to be a woman in the Wild Wild West. And if that woman is wearing a badge and slinging a six-shooter, it’s even harder. Especially for any foolhardy man who gets in her way . . .


The frontier town of Ring Bit, Texas, has a way of attracting trouble. Shootouts. Showdowns. Shady drifters. But it’s never seen anything like the mysterious gunman Hawkshaw. Is he good or evil? As the town marshal, it’s Tennessee Smith’s job to keep an eye on him. Which is okay because he sure is easy on the eyes . . .

Of course, Tennessee needs another man in her life like she needs a hole in the head. This mail-order bride-turned-widow is raising three young stepsons on her own. And now she’s taking the boys to Austin to get married again. Between outlaws and in-laws, she’s got her hands full. When Tennessee’s stagecoach is ambushed—and she’s taken hostage—she could use help to shoot her way out. Even if that someone is a dangerously mysterious gunman named Hawkshaw . . .

Easy Jackson (a.k.a. V. J. Rose) has written articles for Round-Up Magazine, The Tombstone Times, and many others. Her short story "Testimony" from the Broken Promises western anthology was nominated for a Spur Award from the Western Writers of America. She grew up with an abundance of quirky and colorful characters, the kind that can only be found in small-town Texas. A Season in Hell is her third novel. She cannot promise it will be her last.

“A good, well-written read; light and suspenseful.”
—Roundup Magazine on A Bad Place to Die by Easy Jackson