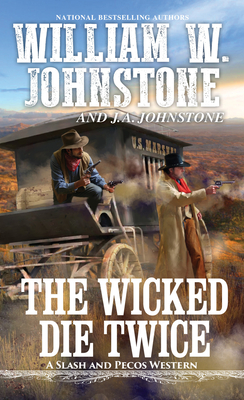 This is book number 3 in the A Slash and Pecos Western series.

Once upon a time in the Old West, Slash and Pecos were two of the wiliest robbers this side of the Rio Grande. Now they're a couple of old timers charged with wrangling an unholy trio of killers escaped from prison. Because not every Western hero wears a white hat or a tin star. Most of them are just fighting to survive.

Not many men get a second chance at life. But thanks to a chief U.S. Marshal who needs their help, the bank-robbing duo of Jimmy "Slash" Braddock and Melvin "Pecos Kid" Baker are on the right side of the law. As unofficial marshals, they've agreed to pick up three prisoners from a Milestown jail and escort them to Denver. Sounds easy enough--until they learn the prisoners are an unholy trio of sadistic cutthroat killers known as Talon, "Hellraisin'" Frank, and the Sioux called Black Pot. And they've managed to escape before Slash and Pecos even show up...

The three convicts have turned Milestown into their own savage slayground. Drinking, killing, ravaging--and worse--they're painting the town red with blood and burning it to the ground. Slash and Pecos manage to stop them in a nick of time. But getting these three to Denver is another story--because the trio's leader has offered a thousand-dollar bounty to anyone who can kill Slash and Pecos. This is going to be one wicked ride that Slash and Pecos will never forget--if they live to tell about it...

Being the all-around assistant, typist, researcher, and fact checker to one of the most popular western authors of all time, J.A. Johnstone learned from the master, Uncle William W. Johnstone.

"Every day with Bill was an adventure story in itself. Bill taught me all he could about the art of storytelling. ‘Keep the historical facts accurate,' he would say. ‘Remember the readers, and as your grandfather once told me, I am telling you now: be the best J.A. Johnstone you can be.'"