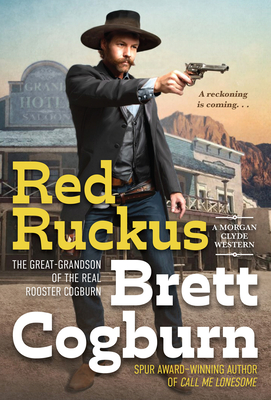 This is book number 3 in the A Morgan Clyde Western series.

Morgan Clyde, former New York City peacekeeper and Union army veteran, is a man of righteous words and a gunfighter of uncanny skill. With deadly aim he has ended the reign of every badman to walk the dirt-packed streets of Indian Terriotry’s notorious Ironhead Station. But now he faces those who wear the badge.

With every corrupt businessman, immoral thief, and brutal outlaw either behind bars or six feet under, the town of Eufaula has come under the jurisdiction of men who bend the law to their own whims. They’ve broken their sworn oaths to protect the innocent and annointed themselves as judges, juries, and executioners.

Now Morgan must break the law to enforce it, even if it means putting old friends—and lovers—into his line of fire...

Brett Cogburn is a two-time Spur Award-winning author and the great-grandson of the man who inspired True Grit, Rooster Cogburn. He was reared in Texas and the mountains of Southeastern Oklahoma, where his grandfather taught him to ride a bucking horse and his father taught him to hunt. For many years he made his living from the back of a horse. Somewhere during his knockabout years cowboying and working in oil fields, he earned a BA in English with a minor in History. He lives with his family on a little ranch in Oklahoma and can be found online at BrettCogburn.com.