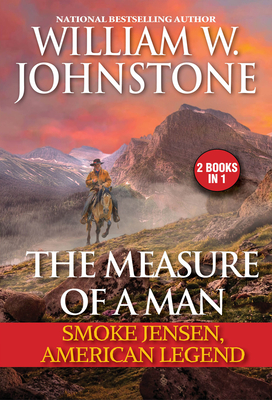 Smoke Jensen calls the mountains home. The unforgiving wilderness taught him to survive. There’s no creature he hasn’t fought. There’s no storm he hasn’t weathered. And there’s no man in the untamed West who doesn’t fear his name. The Measure of a Man collects two adventures of New York Times bestselling author William W. Johnstone’s champion of the American frontier in one volume.

War of the Mountain Man

Nestled in the north Montana Rockies lies Hell’s Creek. A haven for outlaws, every thief and killer with an itchy trigger finger and an appetite for destruction pays their dues to Big Max Higgins, a criminal king seeking to expand his empire. But when he targets the town of Barlow, his gang ends up trading lead with Smoke Jensen, the Last Mountain Man, and the last man they ever should have crossed . . .

Law of the Mountain Man

In the dead of winter in frostbitten Idaho Territory two ranching outfits are at war, battling over the range. Between them comes Smoke Jensen, traversing the frontier and minding his own business, when he finds himself dodging bullets. Caught in the crossfire, threatened by both sides to sign up or occupy a grave, Smoke declares his own war, leaving casualties colder than the snow across the range . . .