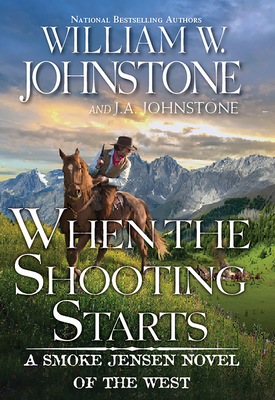 Before he became known as “The Last Mountain Man,” Smoke Jensen and his bride Sally were hard-working ranchers on the Colorado frontier, when times were hard, tensions were high, and guns were the law…

For Smoke and Sally Jensen, the Sugarloaf Ranch is a glorious stretch of untamed land near the Colorado-Kansas border, the perfect place to stake their claim, raise some cattle, and start a new family. But when a man claiming to be an army colonel arrives in Big Rock—with a well-armed militia—the Jensens’ dream becomes a living nightmare. Colonel Lamar Talbot claims there’s a war looming with the Cheyenne Indians. And only he can save them from a bloody massacre—by launching a bloody counterattack…

Smoke and Sally aren’t sure they trust him. They suspect the colonel and his men are nothing more than brutal vigilantes with a hidden agenda of their own. But the Cheyenne war parties are a very real threat. The tribe’s charismatic leader, Black Drum, is launching raids on local ranches, farms, and the railroads, too. Every day, the violence gets worse and the war moves closer—until it reaches the Sugarloaf Ranch. That’s when Sally gets attacked. That’s when Smoke grabs his guns. That’s when the shooting starts—and the final battle begins…