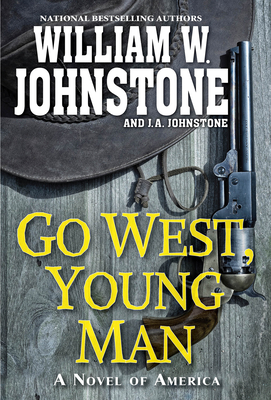 Join an epic cross-country journey that will have you on the edge of your seat, as two families head West and confront the hardships and triumph only those brave enough to face an untamed land could overcome, in this riveting saga from the legendary bestselling author…

Missouri, 1860. Rumors of war between the North and South are spreading across the land. In rural Green County, many of the farmers are already choosing sides. But not John Zachary. His loyalties lie with his family first—and his heart is telling him to go west. Hoping to build a new life in the fertile valleys of Oregon, he convinces his best friend, Emmett Braxton, to pack up their families and join him on a wagon train across the Oregon Trail. The journey will be long and hard. The physical hardships and grueling mental challenges will bring out the best in some—and the worst in others. But with the guidance of an experienced wagon master and scout, they are determined to reach their destiny, no matter how high the cost . . .

Twenty-seven wagons. Twenty-seven different hopes and dreams. This sprawling epic novel from a master storyteller captures the beauty and danger of the American West—and the pioneer spirit of those who tamed it . . .

William W. Johnstone is the New York Times and USA Today bestselling author of over three hundred novels of Western adventure, military action, and chilling suspense, and with over 35 million books in print, he is the best-selling Western writer in the world. Born in southern Missouri, he was raised with strong moral and family values by his minister father, and tutored by his schoolteacher mother. He left school at fifteen to work in a carnival and then as a deputy sheriff before serving in the army. He went on to become known as "the Greatest Western writer of the 21st Century." Visit him online at WilliamJohnstone.net.

J.A. Johnstone learned to write from the master himself, Uncle William W. Johnstone, who began tutoring J.A. at an early age. After-school hours were often spent retyping manuscripts or researching his massive American Western History library as well as the more modern wars and conflicts. J.A. worked hard--and learned. "Every day with Bill was an adventure story in itself. Bill taught me all he could about the art of storytelling. 'Keep the historical facts accurate,' he would say. 'Remember the readers, and as your grandfather once told me, I am telling you now: be the best Johnstone you can be.'" J.A. Johnstone has co-written numerous bestselling series with William W. Johnstone including The First Mountain Man, The Brothers O'Brien, Preacher, and The Last Mountain Man.