To the River's End: A Thrilling Western Novel of the American Frontier (Mass Market) 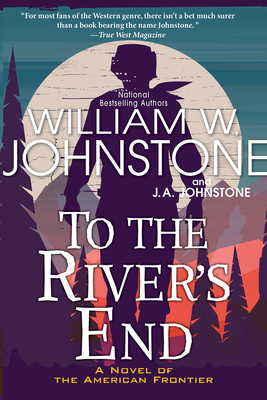 An epic saga based on true events of the American West —with the trailblazing fur trappers and the mountain men who lived it. This is an unforgettable journey into the untamed American frontier. Where nature is cruel, violence lurks behind every tree, and where only the strongest of the strong survive. This is a story of America.

TO THE RIVER’S END

Luke Ransom was just eighteen years old when he answered an ad in a St. Louis newspaper that would change his life forever. The American Fur Company needed one-hundred enterprising men to travel up the Missouri River—the longest in North America—all the way to its source. They would hunt and trap furs for one, two, or three years. Along the way, they would face unimaginable hardships: grueling weather, wild animals, hunger, exhaustion, and hostile attacks by the Blackfeet and Arikara. Luke Ransom was one of the brave men chosen for the job—and one of the few to survive . . .

Five years later, Luke is a seasoned trapper and hunter, a master of his trade. The year is 1833, and the American Fur Company is sending him to the now-famous Rendezvous at Green River. For Luke, it may be his last job for the company. After facing death countless times, he is ready to strike out on his own. But when he encounters a fellow trapper under attack by Indians, his life takes an unexpected turn. A new friendship is forged in blood. And a dangerous new journey begins…

William W. Johnstone is the New York Times and USA Today bestselling author of over three hundred novels of Western adventure, military action, and chilling suspense, and with over 35 million books in print, he is the best-selling Western writer in the world. Born in southern Missouri, he was raised with strong moral and family values by his minister father, and tutored by his schoolteacher mother. He left school at fifteen to work in a carnival and then as a deputy sheriff before serving in the army. He went on to become known as "the Greatest Western writer of the 21st Century." Visit him online at WilliamJohnstone.net.

J.A. Johnstone learned to write from the master himself, Uncle William W. Johnstone, who began tutoring J.A. at an early age. After-school hours were often spent retyping manuscripts or researching his massive American Western History library as well as the more modern wars and conflicts. J.A. worked hard--and learned. "Every day with Bill was an adventure story in itself. Bill taught me all he could about the art of storytelling. 'Keep the historical facts accurate,' he would say. 'Remember the readers, and as your grandfather once told me, I am telling you now: be the best Johnstone you can be.'" J.A. Johnstone has co-written numerous bestselling series with William W. Johnstone including The First Mountain Man, The Brothers O'Brien, Preacher, and The Last Mountain Man.