Westbound (The Battling Harrigans of the Frontier #1) (Mass Market) 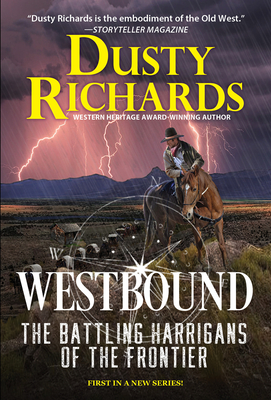 From the Spur Award-winning author, the first in a captivating new multigenerational saga chronicling the adventures of the pioneering Harrigan family as they brave crossing the American West, fighting to survive in the dangerous wilderness—and against even deadlier people—to forge a better life for themselves.

Mackworth “Mack” Harrigan’s family legacy burned to the ground in the spring of 1849. The Ohio mill that brought them prosperity was now cinder and ash, and his ruthless father perished in the flames along with their fortune. If the Harrigans have a future, it lies out west in open country where they can build whatever lives they choose. Mack knows his wife Ell, and their children Kane, Meghan, and Fitch are more than capable of overcoming the challenges of their journey.

For the untamed frontier is full of seriously deadly battles. From a rough river voyage to wagon train travel across desert lands plagued by dust storms, the Harrigans encounter desperados and merciless killers who view them as little more than prey. And as Mack and his family adapt to their merciless surroundings, they realize they must enforce their own laws and dispense their own justice. . .

Western Heritage Award and three-time Spur Award-winning author Dusty Richards was the author of over 100 acclaimed westerns. He spent his youth in Arizona and worked as a rancher, auctioneer, rodeo announcer, and TV anchor before he moved to writing full time, going on to become the only author ever to win two Spur Awards from Western Writers of America in one year (2007). He received his third Spur Award for The Mustanger and the Lady, which was adapted into the film “Painted Woman.” An inductee of the Arkansas Writers Hall of Fame, Dusty was also the recipient of the Will Rogers Medallion Award for Western Fiction and was honored by the National Cowboy Hall of Fame in 2009. He was a member of the Professional Rodeo Cowboys Association and the International Professional Rodeo Association, and served on the local PRCA rodeo board.