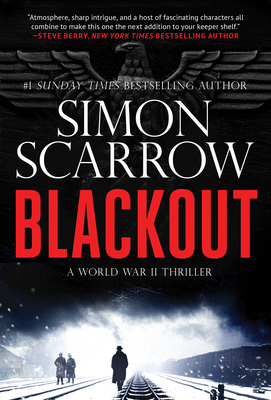 Berlin, 1939. The city is blanketed by snow and ice. In the distance, the rumble of war grows louder. In the shadows, a serial killer rises . . .

As the Nazis tighten their chokehold on the capital, panic and paranoia fester as blackout is rigidly enforced. Every night the city is plunged into an oppressive, suffocating darkness—pitch-perfect conditions for unspeakable acts.

When a young woman is found brutally murdered, it’s up to Criminal Inspector Horst Schenke to solve the case quickly. His reputation is already on the line for his failure to join the Nazi Party. If he doesn’t solve the case, the consequences could be fatal.

Schenke's worst fears are confirmed when a second victim is found. As the investigation takes him deeper into the regime’s darkest corridors, Schenke realizes danger lurks behind every corner—and that the warring factions of the Reich can be as deadly as a killer stalking the streets . . .

Simon Scarrow is a #1 Sunday Times bestselling author whose historical fiction and thrillers have been translated into more  than twenty languages with millions of copies sold. A former history teacher and lecturer, he is the author of the long-running  Eagles of the Empire military fiction series set in Ancient Rome as well as a quartet of novels about the lives of the Duke of  Wellington and Napoleon Bonaparte, among other novels. For more, please visit simonscarrow.co.uk, and follow him on Twitter  @SimonScarrow or like his author page on Facebook/OfficialSimonScarrow.

Praise for Blackout by Simon Scarrow

“There have been several fine thrillers about serial killers stalking London's darkened streets during the Blitz, but fewer about the parallel phenomenon in Berlin. Scarrow changes that with this crisp thriller set in 1939 at the beginning of the war. Scarrow builds tension both from the crimes at hand and from his hero's internal struggle, knowing that eventually his determination to keep policing separate from politics is doomed to failure. … Scarrow makes the most of the blackout as a breeding ground for mayhem.” —Booklist

"(An) exceptional mystery.... Scarrow plausibly conveys the complexities of his hero's efforts to do an honest job of seeking justice while serving under a corrupt and criminal regime. Fans of Philip Kerr’s Bernie Gunther will hope for a sequel." —Publishers Weekly, STARRED REVIEW

“That line between right and wrong gets pretty smudged in this gem of a story. Atmosphere, sharp intrigue, and a host of fascinating characters all combine to make this one the next addition to your keeper shelf." —Steve Berry, New York Times bestselling author

“A gripping thriller.” —The Sunday Times

“Blackout crackles with tension from the first page as the inspector digs through layers of intrigue not knowing whether he’s nearing the truth or digging his own grave. Simon Scarrow launches us on a breakneck ride through a wicked city in a desperate time. What a pleasure.” —James Thayer, author of House of Eight Orchids

“Scarrow's deep knowledge of the Third Reich gives a chilling authenticity to this tense thriller—loosely based on a true story. Thrust into the hunt for a serial killer, Inspector Schenke is a particularly sympathetic hero who must use all his wits to survive the Gestapo…A terrific read.” —Julia Boyd, author of Travellers in the Third Reich

“Simon Scarrow is a master storyteller. Blackout twists and weaves through wartime Berlin in a riveting take on history. A must read!” —James D. Shipman, author of Task Force Baum and Irena’s War

“A master of historical fiction at his finest, Simon Scarrow turns his expert eye on the Third Reich. Blackout is an authentic and compelling story and Horst Schenke the natural heir to Philip Kerr’s Bernie Gunther.” —Howard Linskey, author of Ungentlemanly Warfare and Hunting the Hangman

“The evocation of pre-war Berlin and the atmosphere is so tangible. The finely drawn characters, that mix of glamour and dread, the simmering undercurrent of fear, is finely drawn. Clever, intimate, and full of intrigue.” —David Gilman

“Scarrow is a genius and I love everything he writes, but Blackout takes things to a whole new level. It's by far the best book I've read this year.” —Tom Marcus

“A wonderfully compelling thriller, reeking of authenticity, and a terrific depiction of the human world within the chilling world of the Third Reich.” —Peter James

“Superb…Blackout is a gripping, terrifying read, as well as being a thumping good page-turner. This is historical crime fiction at its finest from a much-loved writer at the very top of his game.” —David Young

“Hugely compelling and brimming with menace…The underlying atmosphere of a city held in the thrall of a killer and of a regime that thrives on fear and distrust is thoroughly authentic and gripping.” —Chris Lloyd

“Loved Blackout. The Berlin of the very early days of the war is vividly drawn and already irredeemably corrupt, the rivalries between the Gestapo, the Kriminalpolizei, Goebbels in Propaganda and Canaris at Intelligence ring all too real, and I fear for Criminal Inspector Schenke's safety in future books given his refusal to join the Nazi Party, his insistence on following the evidence, and his reluctance to compromise the truth.” —Jack Grimwood