Evidence for the Resurrection: What It Means for Your Relationship with God (Paperback) 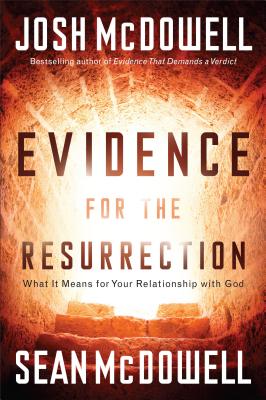 When Jesus died on the cross, it seemed that all had been lost. Death had won. But after three days in a rich man's tomb, Jesus appeared...alive The news was so shocking that his followers refused to believe it until they saw him with their own eyes and touched his wounds with their own hands. Then Jesus made an amazing claim: In the future, they too would have resurrected bodies like his, bodies that would never deteriorate, age, or perish. They would have new life without death or pain in the presence of a loving God forever.

But can we really believe His promise? For that matter, can we really believe that the promise was made by a man who rose from the dead? In this fascinating look at the claims of the Gospel writers and 2,000 years of believing Christians, bestselling author Josh McDowell and his son Sean examine the compelling evidence and conclude that Jesus Christ conquered death and the grave. In clear, concise, and accessible chapters, Josh and Sean present the facts about the resurrection and what it means for readers today.

After almost four decades of ministry, Josh McDowell is still reaching millions of skeptical youth and adults. Through live events, such as Why Wait?, Right from Wrong, and Project 911, he has touched the lives of more than seven million young people in 84 countries. To date, Josh has written or cowritten 77 books on topics ranging from Christian apologetics to common problems facing youth, including the bestselling Evidence that Demands a Verdict and More Than a Carpenter. For thirty years, Josh and his wife, Dottie, have partnered in what he considers his first ministry: family. They have four children and live in Dallas, near the Josh McDowell Ministries headquarters.Sean McDowell (PhD, Southern Baptist Theological Seminary) is a gifted communicator with a passion for reaching the younger generation with the gospel message. A professor at Biola University in the apologetics program, Sean is the author or coauthor of fifteen books, including The Apologetics Study Bible for Students. He travels widely, speaking at camps, churches, universities, and conferences.