Return of the Thin Man (Paperback) 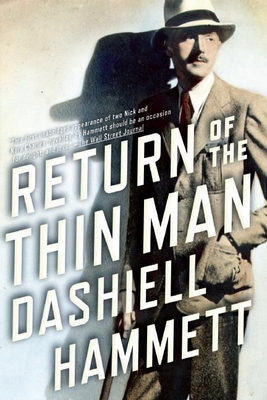 Dashiell Hammett was a crime writer who elevated the genre to true literature, and The Thin Man was Hammett's last--and most successful--novel. Following the enormous success of The Thin Man movie in 1934, Hammett was commissioned to write stories for additional films. He wrote two full-length novellas, for the films that became After the Thin Man and Another Thin Man. Bringing back his classic characters, retired private investigator Nick Charles and his former debutante wife Nora, who return home to find Nora's family gardener murdered, pulling the couple back into another deadly game of cat and mouse. Hammett has written two fully satisfying Thin Man stories, with classic, barbed Hammett dialogue and fully developed characters. Neither of these stories has been previously published (except for a partial in a small magazine 25 years ago). The Return of the Thin Man is a hugely entertaining read that brings back two classic characters from one of the greatest of mystery writers who ever lived. This book is destined to become essential reading for Hammett's millions of fans and a new generation of mystery readers the world over.

Dashiell Hammett was an American author of hard-boiled detective novels and short stories, screenplay writer, and political activist. He created enduring characters including Sam Spade (The Maltese Falcon), Nick and Nora Charles (The Thin Man), and the Continental Op (Red Harvest and The Dain Curse).