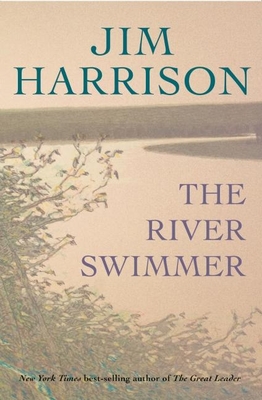 I will read anything that Jim Harrison writes. Countless others have told me the same thing, and yet he still feels largely undiscovered. This slim volume of two novellas is a perfect plane ride’s entertainment that I hope will bring many into the ranks of initiated fans. Harrison’s writing is full of the messy contradictions of life. It is raunchy, uninhibited, and exquisitely sensitive. Nature and humanity, youth and age, love and appetite and their inextricable tensions are both mundane and transporting. Harrison is an American classic who deserves his place alongside Hemingway and Faulkner.

"Among the most indelible American novelists of the last hundred years. . . . Harrison] remains at the height of his powers."--Dwight Garner, The New York Times "Trenchant and visionary."--Ron Carlson, The New York Times Book Review A New York Times best-seller, enthusiastically received by critics and embraced by readers, The River Swimmer is Jim Harrison at his most memorable: two men, one young and one older, confronting inconvenient loves and the encroachment of urbanity on nature, written with freshness, abundant wit, and profound humanity. In "The Land of Unlikeness," Clive--a failed artist, divorced and grappling with the vagaries of his declining years--reluctantly returns to his family's Michigan farmhouse to visit his aging mother. The return to familiar territory triggers a jolt of renewal--of ardor for his high school sweetheart, of his relationship with his estranged daughter, and of his own lost love of painting. In "The River Swimmer," Harrison ventures into the magical as an Upper Peninsula farm boy is irresistibly drawn to swimming as an escape, and sees otherworldly creatures in the water. Faced with the injustice and pressure of coming of age, he takes to the river and follows its siren song all the way across Lake Michigan. The River Swimmer is an exceptional reminder of why Jim Harrison is one of the most cherished and important writers at work today. "Two years have gone by since I first suggested to President Obama that he create a new Cabinet post, and appoint distinguished fiction writer Jim Harrison as secretary for quality of life. The president still has not responded to my suggestion. . . . The River Swimmer] deepens and broadens Harrison's] already openhearted and smart-minded sense of the way we live now, and what we might do to improve it."--Alan Cheuse, NPR

Jim Harrison is the author of thirty-six books of poetry, nonfiction, and fiction. He divides his time between Montana and Arizona.