Honorable Treachery: A History of U. S. Intelligence, Espionage, and Covert Action from the American Revolution to the CIA (Paperback) 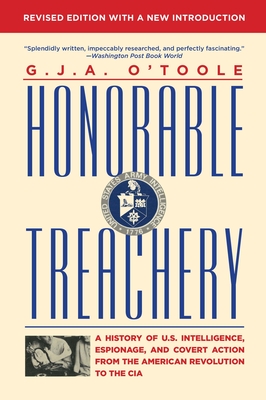 Foreign policy in peacetime and command decision in war have always been driven by intelligence, and yet this subject has often been overlooked in standard histories. Honorable Treachery fills in these details, dramatically recounting every important intelligence operation since our nation's birth. These include how in 1795 President Washington mounted a covert operation to ransom American hostages in the Middle East; how in 1897, Kaiser Wilhelm II's plans for an invasion of the United States were scuppered by the director of the U.S. Office of Naval Intelligence; and how President Woodrow Wilson created a secret agency called the Inquiry to compile intelligence for the peace negotiations at the end of World War I. Honorable Treachery puts America's use of covert intelligence into a broader historical context, and is sure to appeal to anyone interested in American history and the secret workings of our country.

George O'Toole (1937-2001) worked for the CIA from 1966 to 1969. He was the author of several award-winning books, including the Encyclopedia of American Intelligence and Espionage; Honorable Treachery, The Spanish War, which was a Pulitzer Prize finalist; and the novels The Cosgrove Report and An Agent on the Other Side.