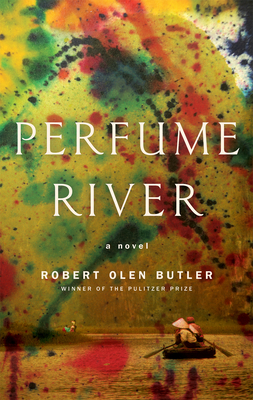 By Robert Olen Butler
$25.00
Not Available

From one of America's most important writers, Perfume River is an exquisite novel that examines family ties and the legacy of the Vietnam War through the portrait of a single North Florida family. Robert Quinlan is a seventy-year-old historian, teaching at Florida State University, where his wife Darla is also tenured. Their marriage, forged in the fervor of anti-Vietnam-war protests, now bears the fractures of time, both personal and historical, with the couple trapped in an existence of morning coffee and solitary jogging and separate offices. For Robert and Darla, the cracks remain under the surface, whereas the divisions in Robert's own family are more apparent: he has almost no relationship with his brother Jimmy, who became estranged from the family as the Vietnam War intensified. Robert and Jimmy's father, a veteran of WWII, is coming to the end of his life, and aftershocks of war ripple across their lives once again, when Jimmy refuses to appear at his father's bedside. And an unstable homeless man whom Robert at first takes to be a fellow Vietnam veteran turns out to have a deep impact not just on Robert, but on his entire family.

Robert Olen Butler is the Pulitzer Prize-winning author of sixteen novels, including Hell, A Small Hotel, and the Christopher Marlowe Cobb series. He is also the author of six short story collections and a book on the creative process, From Where You Dream. He has twice won a National Magazine Award in Fiction and received the 2013 F. Scott Fitzgerald Award for Outstanding Achievement in American Literature. He teaches creative writing at Florida State University.