Anatomy of a Song: The Oral History of 45 Iconic Hits That Changed Rock, R&B and Pop (Paperback) 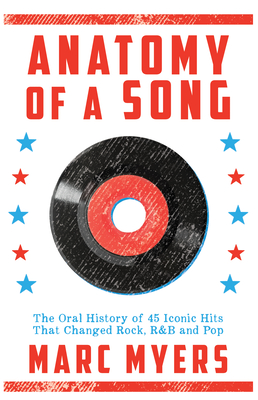 Based on the popular Wall Street Journal column, Anatomy of a Song captures the stories behind 45 influential rock, R&B, and pop hits through oral-history interviews with the artists who wrote and recorded them--including Keith Richards on Street Fighting Man, Rod Stewart on Maggie May, and more

Writer and music historian Marc Myers brings to life five decades of music in Anatomy of a Song, based on the popular ongoing Wall Street Journal column, through oral histories of forty-five transformative songs woven from interviews with the artists who created them.

Taking readers inside the making of a hit, Anatomy of a Song includes Led Zeppelin's "Whole Lotta Love," Janis Joplin's "Mercedes Benz," Rod Stewart's "Maggie May," and Cyndi Lauper's "Time After Time." Joni Mitchell remembers living in a cave on Crete with the "mean old daddy" who inspired her 1971 hit "Carey," while Elvis Costello talks about writing "(The Angels Wanna Wear My) Red Shoes" on a train to Liverpool. Keith Richards, Mick Jagger, Jimmy Page, Smokey Robinson, Grace Slick, Mavis Staples, Steven Tyler, the Clash, Merle Haggard, Bonnie Raitt, Debbie Harry, and many other leading artists reveal the inspirations, struggles, and techniques behind their influential works. Covering the history of rock, R&B, country, disco, soul, reggae and pop, Anatomy of a Song is a love letter to the songs that have defined several generations of listeners.

Marc Myers is a regular contributor to The Wall Street Journal, where he writes about rock, soul, and jazz, as well as the arts. He is the author of the critically acclaimed book Why Jazz Happened and posts daily at JazzWax.com, a two-time winner of the Jazz Journalists Association's award for Blog of the Year.