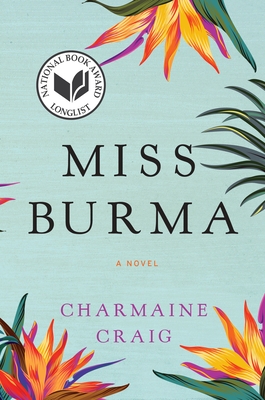 “Charmaine Craig's Miss Burma is nothing short of stunning. Based on the lives of her mother and grandparents in Burma, Craig deftly tells the epic story of one family as they try to survive the horrors of World War II, independence, and then civil war. What distinguishes this book from others is its frank look at who and what survives under such perilous conditions. Especially for readers unfamiliar with Burma, like me, Miss Burma is a chronicle of loss and love in a country too long neglected by the world.”
— Michael Triebwasser, Politics & Prose Books and Coffee Shop, Washington, DC

“Miss Burma is an ambitious and heartbreaking novel about a multicultural family in Burma as World War II enters their country. From the 1940s through the civil war of the 1950s and ’60s, the family’s circumstance ranges from prosperity to refugee status to prisoners, while each member of the family struggles with issues of love, loyalty, and identity. The novel is all the more amazing in that it is based on the true story of the author’s own parents and grandparents.”
— Stan Hynds, Northshire Bookstore, Manchester Center, VT

A powerful and epic novel of colonialism, ethnicity, and the ties of blood, Miss Burma tells the story of modern-day Burma through the eyes of one family struggling to find love, justice, and meaning during a time of war and political repression.
Miss Burma tells the story of modern-day Burma through the eyes of Benny and Khin, husband and wife, and their daughter Louisa. After attending school in Calcutta, Benny settles in Rangoon, then part of the British Empire, and falls in love with Khin, a woman who is part of a long-persecuted ethnic minority group, the Karen. World War II comes to Southeast Asia, and Benny and Khin must go into hiding in the eastern part of the country during the Japanese Occupation, beginning a journey that will lead them to change the country's history. After the war, the British authorities make a deal with the Burman nationalists, led by Aung San, whose party gains control of the country. When Aung San is assassinated, his successor ignores the pleas for self-government of the Karen people and other ethnic groups, and in doing so sets off what will become the longest-running civil war in recorded history. Benny and Khin's eldest child, Louisa, has a danger-filled, tempestuous childhood and reaches prominence as Burma's first beauty queen soon before the country falls to dictatorship. As Louisa navigates her newfound fame, she is forced to reckon with her family's past, the West's ongoing covert dealings in her country, and her own loyalty to the cause of the Karen people. Based on the story of the author's mother and grandparents, Miss Burma is a captivating portrait of how modern Burma came to be and of the ordinary people swept up in the struggle for self-determination and freedom.

CHARMAINE CRAIG's first novel, The Good Men (Riverhead), was a national bestseller translated into six languages. Craig is a faculty member in the Department of Creative Writing at UC Riverside and the descendant of significant figures in Burma's modern history. A former actor in film and television, she studied literature at Harvard University and lives in Los Angeles with her husband and daughters.