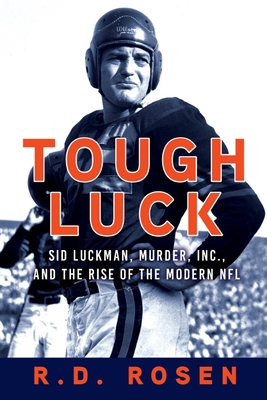 In the long annals of sports and crime, no story compares to the one that engulfed the Luckman family in 1935. As 18-year-old Sid Luckman made headlines across New York City for his high school football exploits at Erasmus Hall High School in Brooklyn, his father, Meyer Luckman, was making headlines in the same papers for a very different reason: the gangland murder of his own brother-in-law. Amazingly, when Sid became a star at Columbia and a Hall of Fame NFL quarterback in Chicago, all of it while Meyer Luckman served 20-years-to-life in Sing Sing Prison, the connection between sports celebrity son and mobster father was studiously ignored by the press and ultimately overlooked for eight decades.

R. D. Rosen's many books include recent nonfiction that connects America's past and present, including A Buffalo in the House: The True Story of a Man, an Animal, and the American West and Such Good Girls: The Journey of the Holocaust's Hidden Child Survivors. He won an Edgar Allan Poe Award for his first of five mystery novels featuring retired Jewish major league baseball player-turned-detective Harvey Blissberg, and has written about sports for many national publications. He has served as a senior editor for both ESPN Books and Workman Publishing, and once upon a time wrote or performed comedy for PBS, HBO, and Saturday Night Live. He grew up across the street from Sid Luckman in Highland Park, Illinois, and lives in New York, where he still roots for the Chicago Bears.