The Visitors and Fred and Madge: Two Plays (Paperback) 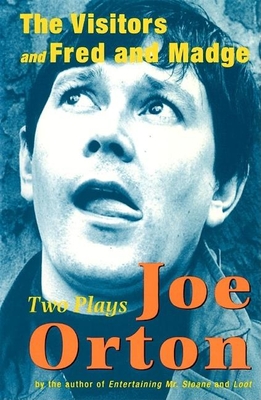 As one of Britain's legendary group of Angry Young Men dramatists, Joe Orton shot to fame on the strength of vicious farces like Loot and What the Butler Saw. Today, with Orton's work garnering increasing attention and recognition in the wake of the 1987 feature film about his life, Prick Up Your Ears, his early writing has still remained obscure. Now the publication of these two recently discovered plays, written immediately before his breakthrough successes, reveals a key moment in his development as a dramatist. Fred & Madge, Orton's first play, is an absurdist drama, fraught with social critique and sexual innuendo. It's the story of a married couple whose respective jobs are the Sisyphean task of rolling boulders uphill and sieving water all day long, until they discover they are inhabiting a play about themselves. The Visitors is a brutally realistic rendering of a dying man who is visited in the hospital by his middle-aged daughter, while the attending nurses spend more time fighting than caring for their patients. Written in 1961, it shows the beginnings of the mature voice that would come to fruition in his next projects, The Ruffian on the Stair and Entertaining Mr. Sloane, which made his name in London and the world.