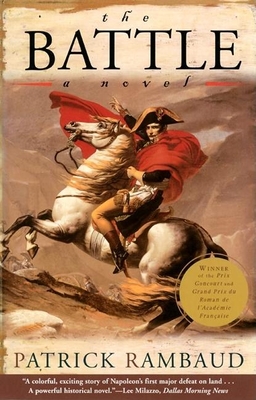 By Patrick Rambaud, Will Hobson (Translator)
$17.00

The winner of the Prix Goncourt and Grand Prix du Roman de l'Academie Francaise, The Battle is a brilliant, compelling novelization of the battle of Essling, Napoleon's first major defeat. The battle of Essling has long been overlooked by historians and novelists, but Rambaud, relying on research notes compiled by Honore de Balzac, has re-created the confrontation with exceptional skill. Balzac had always wanted to write this novel, but he never moved past the research stage. Picking up where his predecessor left off, Rambaud renders the epic battle in all its pageantry, violence, and chaos. The Battle opens on May 16, 1809, as Napoleon's forces confront the assembled armies of the Austro-Hungarian Empire at Essling, near Vienna. Angered by the Austrians' challenge to his rule over their land, Napoleon is determined to crush the enemy troops with the quick maneuvers that won so many previous battles. Yet the French soon find that the wide-open Austrian plains are not conducive to their techniques, as the enemy's sheer manpower begins to overwhelm them.