Driving Like Crazy: Thirty Years of Vehicular Hell-Bending, Celebrating America the Way It's Supposed to Be -- With an Oi (Paperback) 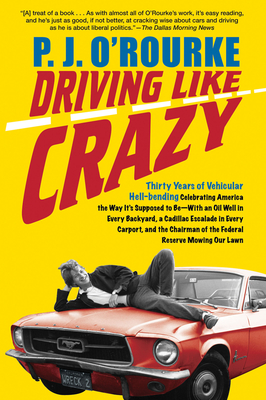 Driving Like Crazy celebrates cars and author P. J. O'Rourke's love for them, while chronicling the golden age of the automobile in America. O'Rourke takes us on a whirlwind tour of the world's most scenic and bumpiest roads in trouble-laden cross-country treks, from a 1978 Florida-to-California escapade in a 1956 special four-door Buick sedan to a 1983 thousand-mile effort across Mexico in the Baja 1000 to a trek through Kyrgyzstan in 2006 on the back of a Soviet army surplus six-wheel-drive truck. For longtime fans of the celebrated humorist, the collection features a host of O'Rourke's classic pieces on driving, including "How to Drive Fast on Drugs While Getting Your Wing-Wang Squeezed and Not Spill Your Drink," about the potential misdeeds one might perform in the front (and back) seat of an automobile; "The Rolling Organ Donors Motorcycle Club," which chronicles a seven-hundred-mile weekend trip through Michigan and Indiana that O'Rourke took on a Harley Davidson alongside Car & Driver publisher David E. Davis, Jr.; his brilliant and funny piece from Rolling Stone on NASCAR and its peculiar culture, recorded during an alcohol-fueled weekend in Charlotte, North Carolina, in 1977; and an hilarious account of a trek from Islamabad to Calcutta in Land Rover's new Discovery Trek.