The Poker Bride: The First Chinese in the Wild West (Paperback) 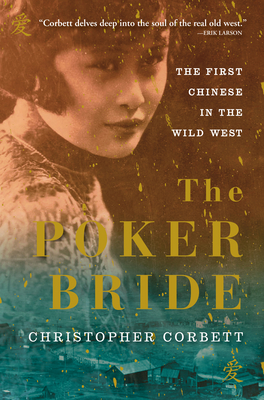 When Gold Rush fever gripped the globe in 1849, thousands of Chinese came through San Francisco to seek fortune. In The Poker Bride, Christopher Corbett uses a legend of one extraordinary woman as a lens into this experience. Before 1849, the Chinese in the United States were little more than curiosities. But as word spread of gold in California, San Francisco's labyrinthine Chinatown sprang up, a city-within-a-city full of exotic foods and strange smells where Chinese women were smuggled into the country. At this time Polly, a young Chinese concubine, was brought by her owner to a remote mining camp in the highlands of Idaho, where he lost her in a poker game. Polly and her new owner then settled at an isolated ranch on the banks of the Salmon River. As the Gold Rush receded, it took with it the Chinese miners, but left behind Polly, who would make headlines when -- as an old woman -- she emerged from the Idaho hills nearly half a century later to tell her astounding story. The Poker Bride reconstructs a tale of the real American West: a place where the first Chinese flooded the country and left their mark long after the craze for gold had vanished.

Christopher Corbett is the author of Orphans Preferred: The Twisted Truth and Lasting Legend of the Pony Express, as well as a novel, Vacationland. He teaches journalism at the University of Maryland, Baltimore County.

Exhaustively researchedCorbett uses Bemis’s story as a platform for a larger discussion about the hardships of the Chinese experience in the American West.”Aaron Leitko, The Washington Post

Corbett’s accomplishment in pulling this dark history into a popular narrative is all the more impressive when you consider the difficulty of reporting on a foreign population that lived mainly outside the reach of census takers and journalistsCorbett handles a great deal of sordid material with sensitivityIn restoring to the poker bride a more honest and complete history, Corbett undoes generations of self-serving mythology.”Dominique Browning, The New York Times Book Review (Editor’s Choice)

Imagine McCabe & Mrs. Miller, The Treasure of the Sierra Madre and Deadwood hand-stitched together and given a novel slant as a mini-epic of Chinese immigrant life. That suggests the polyglot vitality of The Poker Bridea juicy combination of social history and deconstructed myth[Corbett] juggles facts and apocrypha like a masterwith The Poker Bride, Corbett cements his claim as an ace surveyor of America’s borderland of fable.”Michael Sragow, The Baltimore Sun

In The Poker Bride, Christopher Corbett delves deep into the soul of the real old west, using the story of one Chinese sojourner’a young woman named Pollyas the thread to link a thousand pearls of fact and lore and whatever you call those fragments of story that lie somewhere in between. All I can say is, Twain would be proud.”Erik Larson, author of The Devil in the White City

[Corbett] turns a dark chapter in our history into compelling reading.”The Week

The main strength of Corbett’s book is his detailed description of life in wide-open California and the Pacific Northwest [Polly Bemis’] story is remarkable, and Corbett’s research is certainly thorough. The Poker Bride adds immeasurably to the Asian-American nonfiction catalog.”Martin Brady, Bookpage