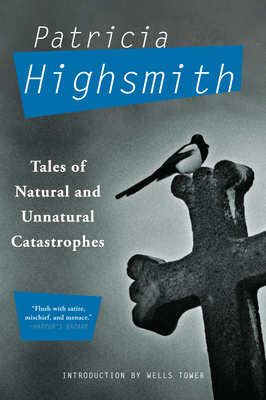 The legendary writer Patricia Highsmith is best remembered today for her chilling psychological thrillers The Talented Mr. Ripley and Strangers on a Train, which was made into the classic film by Alfred Hitchcock and Raymond Chandler. A critically-acclaimed best seller in Europe, Highsmith struggled during her life for recognition in the United States, but since her death in 1995 Highsmith's reputation has grown tremendously, and she is now recognized as one of the signature voices of the troubled twentieth century. "When the dust has settled," critic A.N. Wilson wrote, "and when the chronicle of twentieth-century American literature comes to be written, history will place Highsmith at the top of the pyramid, as we should place Dostoevsky at the top of the Russian hierarchy of novelists." Tales of Natural and Unnatural Catastrophes is the last short fiction published during Highsmith's lifetime. The ten eerily up-to-date stories chronicle a world gone slightly mad; environmental degradation, apocalyptic disaster, political chaos, and religious conservatism are captured in incisive prose that leaves us haunted with "afterimages that will tremble--but stay--in our minds" (The New Yorker).

"Whereas we read Stephen King or Ruth Rendell to relish the thrills that come from carefully controlled verbal terror, Highsmith is not to be taken so lightly. She conveys a firm, unshakable belief in the existence of evil--personal, psychological, and political. ... The genius of Tales--and all of Highsmith's writing--is that it is at once deeply disturbing and exhilarating."Boston Phoenix

Highsmith is the poet of apprehension rather than fear. In her short stories Highsmith naturally has to adopt a different method. She is after the quick kill rather than the slow encirclement of the reader, and how admirably and with what field-craft she hunts us down.” Graham Greene

One of the truly brilliant short-story writers of the 20th century.” Otto Penzler

Highsmith’s genius is in presenting fantasy’s paradox: successes are not what they seem . . . Where in the traditional fairy tale the heroine turns the toad into a prince, in Highsmith’s fable the prince becomes a toadsuccess is nearly always fatal. Combining the best features of the suspense genre with the best of existential fictiona reflectionthe stories are fabulous, in all senses of that word.”Paul Theroux

"The stories are flush with satire, mischief and menace. Hers is a world consumed by self-destruction, driven by stupidity, greed and self-interest--a place where the human race cannibalizes its own. ... [Her stories] unsettle the soul and dampen the palms."Harper's Bazaar