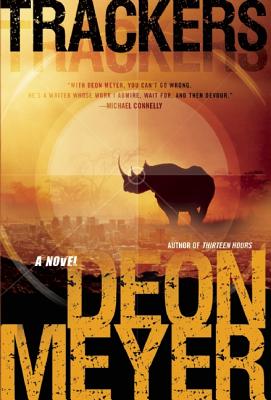 Lemmer's first rule is: Don't get involved. A highly skilled bodyguard with a violent, criminal past, he has settled into a quiet life in Loxton, South Africa, where the rural tranquility has helped to calm his explosive temper. But when a wealthy farmer asks for his help in smuggling a pair of rare black rhinos out of Zimbabwe (where they are murdered for their horns), he has a hard time saying no. Before he knows it, Lemmer is on a small airplane, zipping across the border, an airsickness bag in his hand and a military-grade shotgun at his feet. Soon, he will regret the trip very much. In Trackers, internationally-acclaimed thriller writer Deon Meyer expertly weaves together Lemmer's story with a missing person investigation and the machinations of a top intelligence agency. Wielding a phenomenal cast of characters, Meyer delves deep into the people, the breathtaking landscapes, and the politics and problems of this fascinating country. A #1 best-seller in South Africa, Trackers is an insightful novel that will take your breath away. mortal danger.

One of Kirkus Reviews Best Thrillers of the Year

In his seventh novel, the king of South African crime fiction outdoes himself, packing in enough plot to power three separate novels. Aside from masterfully juggling intricate plot details and ripping off some bloodcurdling action scenes, Meyer lays bare more ruthlessly than ever before the chaos that lurks beneath South Africa’s new identity ... Meyer has few equals when it comes to combining biting social critique and riveting action scenes. Booklist (starred review)

Meyer’s ambition matches his execution in this brilliantly complex standalone thriller set in his native South Africa. This powerhouse read, which captures the many facets of modern South Africa, should be the American breakthrough this talented author deserves.” Publishers Weekly (starred review)

In his native South Africa Meyer is a bigger hitter than his namesake Twilight author, whom he jokes is his cousin. His books regularly slay the vampire romances in the charts, with their gritty realisations of the seamier side of South African life.”The Bookseller

The King of South African Crime’ has spun another intricate tale of intrigue, adventure, and crime.”Deadly Pleasures

Meyer’s punch lies in the authenticity and depth of his characters. And he has his finger on the pulse of modern South Africa. This is what makes Trackers a winner.”Die Volksblad (South Africa)

A cleverly constructed story and a great adventure.”Beeld (South Africa)

This is a book you can only put down with great difficulty.”Die Burger (South Africa)

"Trackers is technically probably the most challenging an author can attempt. But Meyer does it with consummate ease. With this book, I truly believe, he has now risen head and shoulders above what has been done in the crime genre internationally.”Rapport (South Africa)

"[A] brilliant and intricately plotted thriller far beyond ordinary genre fiction. Trackers is an ambitious novel that opens a window into the people, the problems, and the landscapes of South Africa. Tense action scenes, unrelenting suspense, and a phenomenal cast of characters ranging from farmers and conservationists, to outlaws and intelligence agents, make it abundantly clear why Mr. Meyer has been crowned the 'King of South African crime.'"New York Journal of Books

"A boon for the mystery/thriller connoisseur weary of the same old backdrop, Meyer’s South Africa is palpable, a world at once achingly beautiful yet torn still by deep-seated racial hatred and injustice. Trackers is a thick, meaty mystery full of twists and subplots.”Shelf Awareness

"In the second decade of the 21st century, some of the most compelling contemporary crime-fiction novels are either set in or coming from Africa. Much as Scandinavia became associated with the genre a few years back -- thanks in large part to Stieg Larsson's Millennium trilogy -- Africa may become a new capital of literary crime. Just as the works of James Ellroy and Carl Hiaasen dig beneath the glitter and glamour of Hollywood and South Beach, respectively, to reveal a nasty, fetid underside, [Trackers goes] beyond nightly news pictures of deprivation and desperation."Cary Darling, Fort Worth Star-Telegram

"Once again, Deon Meyer creates a vivid and sometimes frightening look at life in contemporary South Africa, which serves as the background for a real can’t-put-it-downer of a thriller. In the course of his six previous novels, each of which has been more exciting than the previous one, he has continued to expand his plotting and characters. This is his most complex and intricate novel yet, filled with twists and ironies and a series of surprises in the conclusion that make it all work."Mary Whipple, MaryWhippleReviews.com

"[Meyer's]outdone himself in Trackers, which is certain to top any mystery reader’s best-of-2011 list. This riveting tale has everything from a pair of rhinos to a coven of spies... You will not stop reading this book from the opening line: Some days leave no tracks ” to the final word." --The Globe and Mail (Canada)