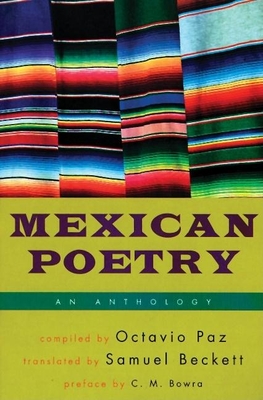 The renowned Mexican poet and critic Octavio Paz assembled this important anthology--the first of its kind in English translation--with a keen sense of what is both representative and universal in Mexican poetry. His informative introduction places the thirty-five selected poets within a literary and historical context that spans four centuries (1521-1910). This accomplished translation is the work of the young Samuel Beckett, just out of Trinity College, who had been awarded a grant by UNESCO to collaborate with Paz on the project.

Notable among the writers who appear in this anthology are Bernardo de Balbuena (1561-1627), a master of the baroque period who celebrated the exuberant atmosphere and wealth of the New World; Juan Ru z de Alarc n (1581?-1639), who became one of Spain's great playwrights; and Sor Juana In's de la Cruz (1651-1695), the beautiful nun whose passionate lyric poetry, written within her convent's walls, has made her, three hundred years later, a proto-feminist literary heroine.

This is a major collection of Mexican poetry from its beginnings until the modern period, compiled and translated by two giants of world literature.

The Nobel Prize-winning OCTAVIO PAZ was born in 1914, near Mexico City. His family was forced into exile, which they served in the United States, after the assassination of Mexican president Zapata, in 1919. In 1943 Paz received a Guggenheim Fellowship and he moved to the United States in order to study at the University of California, where he stayed for two years. In 1945 Paz became a Mexican diplomat and moved to Paris, where he would write his masterpiece The Labyrinth of Solitude (1950), a collection of nine essays regarding the Mexican identity. From 1970 to 1974 Paz lectured at Harvard University, where he was made an honorary doctor in 1980. In 1977, Paz was awarded the prestigious Jerusalem Prize for literature and in 1982 he was awarded the Neustadt Prize. It was in 1990 that Paz was awarded the Nobel Prize for Literature for "impassioned writing with wide horizons, characterized by sensuous intelligence and humanistic integrity." Paz died of cancer in 1998.