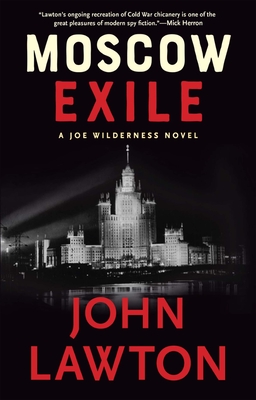 From "quite possibly the best historical novelist we have" (Philadelphia Inquirer), the fourth Joe Wilderness spy thriller, moving from Red Scare-era Washington, D.C. to a KGB prison near Moscow's KremlinIn Moscow Exile, John Lawton departs from his usual stomping grounds of England and Germany to jump across the Atlantic to Washington, D.C., in the fragile postwar period where the Red Scare is growing noisier every day. Charlotte is a British expatriate who has recently settled in the nation's capital with her second husband, a man who looks intriguingly like Clark Gable, but her enviable dinner parties and soir es aren't the only things she is planning. Meanwhile, Charlie Leigh-Hunt has been posted to Washington as a replacement for Guy Burgess, last seen disappearing around the corner and into the Soviet Union. Charlie is soon shocked to cross paths with Charlotte, an old flame of his, who, thanks to all her gossipy parties, has a packed pocketbook full of secrets she is eager to share. Two decades or so later, in 1969, Joe Wilderness is stuck on the wrong side of the Iron Curtain, held captive by the KGB, a chip in a game way above his pay grade--but his old friends Frank and Eddie are going to try to spring him out of the toughest prison in the world. All roads lead back to Berlin, and to the famous Bridge of Spies...Featuring crackling dialogue, brilliantly plotted Cold War intrigue, and the return of beloved characters, including Inspector Troy, Moscow Exile is a gripping thriller populated by larger-than-life personalities in a Cold War plot that feels strangely in tune with our present.

JOHN LAWTON has written three previous novels starring Joe Wilderness--Then We Take Berlin, The Unfortunate Englishman, and Hammer to Fall--as well as eight Inspector Troy thrillers, one standalone novel, and a volume of history. His novels have been named Best Books of the Year by the New York Times, Los Angeles Times, and New York Times Book Review. He lives in England and Italy.