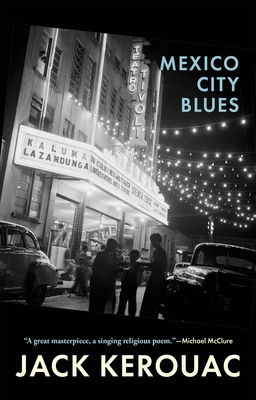 One of the renowned Beat writer's most formally inventive books, Mexico City Blues is Jack Kerouac's essential work of lyric verse, now reissued following his centenary celebrationWritten between 1954 and 1957, and published originally by Grove Press in 1959, Mexico City Blues is Kerouac's most important verse work. It incorporates all the elements of his theory of spontaneous composition and his interest in Buddhism. Memories, fantasies, dreams, and surrealistic free association are lyrically combined in the loose format inspired by jazz and the blues. Written while Kerouac was living in Mexico City, and with references to William S. Burroughs, Gregory Corso, and Bill Garver, this exciting book in Kerouac's oeuvre is an original and moving epic of sound, rhythm, and religion.

JACK KEROUAC was born in Lowell, Massachusetts, in 1922. He won a scholarship to Columbia University, where he first met Neal Cassady, Allen Ginsberg, and William S. Burroughs. On the Road, published in 1957, epitomized to the world what became known as the "Beat generation" and made Kerouac one of the best-known writers of his time. He died in St. Petersburg, Florida, in 1969.