Where the Ashes Are: The Odyssey of a Vietnamese Family (Paperback) 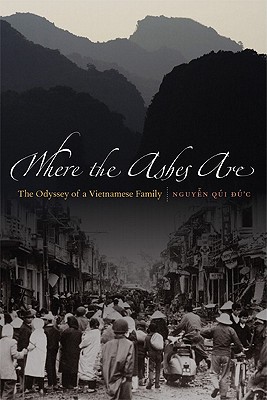 In 1968 Nguyen Qui Duc was nine years old, his father was a high-ranking civil servant in the South Vietnamese government, and his mother was a school principal. Then the Viet Cong launched their Tet offensive, and the Nguyen family’s comfortable life was destroyed. The author’s father was taken prisoner and marched up the Ho Chi Minh Trail. North Vietnam's highest-ranking civilian prisoner, he eventually spent twelve years in captivity, composing poems in his head to maintain his sanity. Nguyen himself escaped from Saigon as North Vietnamese tanks approached in 1975. He came of age as an American teenager, going to school dances and working at a Roy Rogers restaurant, yet yearning for the homeland and parents he had to leave behind. The author’s mother stayed in Vietnam to look after her mentally ill daughter. She endured poverty and “reeducation” until her husband was freed and the Nguyens could reunite. Intertwining these three stories, Where the Ashes Are shows us the Vietnam War through a child’s eyes, privation after a Communist takeover, and the struggle of new immigrants. The author, who returned to Vietnam as an American reporter, provides a detailed portrait of the nation as it opened to the West in the early 1990s. Where the Ashes Are closes with Nguyen’s thoughts on being pulled between his adopted country and his homeland.

Nguyen Qui Duc is a journalist, translator, and writer whose National Public Radio series on Vietnam won the Citation of Excellence from the Overseas Press Club of America. In 2006 he received the Distinguished Service Award from the Society of Professional Journalists for his contributions to journalism.

"Americans still ponder the value of our country’s involvement in what was essentially a Southeast Asian civil conflict. Others wonder about the effect upon our country of an influx of new immigrants. This book provides an honest framework to help readers form their own opinions."—J. Kemper Campbell, Lincoln Journal Star

“[An] eloquent yet tragically matter-of-fact portrayal of courageous perseverance.”—Publishers Weekly

"Nguyen Qui Duc presents a classic story of human endurance with the sage of his family's tribulations during the Vietnam War and their postwar transformation into American overseas Vietnamese."—Sophie Quinn-Judge, Western American Literature