Tesla: Wizard at War: The Genius, the Particle Beam Weapon, and the Pursuit of Power (Hardcover) 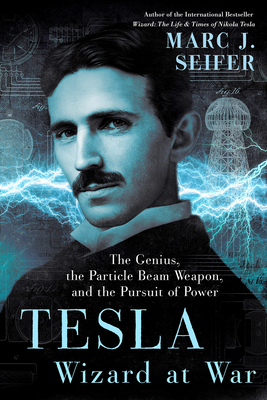 In this insightful and revelatory new book, the author of the highly acclaimed, award-winning international bestseller  Wizard: The Life and Times of Nikola Tesla delves deeper into the groundbreaking ideas and astonishing mind of one  of the greatest geniuses of modern times. The culmination of more than four decades of research, Tesla: Wizard at War explores the historical impact of Tesla’s particle beam weapon and other brilliant work—and how it continues to  shape global military technology and diplomatic strategies even today.

"In a few years hence, it will be possible for nations to fight without armies, ships or guns, by weapons far more terrible to the destructive action and range of which there is virtually no limit. Any city at any distance whatsoever from the enemy can be destroyed by him and no power on Earth can stop him from doing so." —Nikola Tesla, circa 1925

From Tesla's role in the origins of Star Wars technology and his dynamic theory of gravity to the real purpose behind the iconic tower at Wardenclyffe, this is an eye-opening account of Tesla's projects, passions, and ambitions—and an illuminating, important study of one of history's most intriguing figures.

An acclaimed expert on the inventor Nikola Tesla and also in the field of graphology, Marc J. Seifer, Ph.D. has lectured and published on both subjects widely. He starred in the five-part reality mini-series The Tesla Files on the History Channel and has appeared in Tesla documentaries on American Experience and in the motion picture Tower to the People. His other books include Framed: Murder, Corruption, and a Death Sentence in Florida and The Definitive Book of Handwriting Analysis, as well as numerous well-received novels. Visit him at MarcSeifer.com.

PRAISE FOR MARC J. SEIFER AND THE CLASSIC WIZARD: THE LIFE AND TIMES OF NIKOLA TESLA

“Tesla: Wizard at War should be seen as a worthy companion to Seifer’s excellent earlier biography [Wizard: The Life and Times of Nikola Tesla]. The new book is a compendium of Tesla’s writings, newspaper accounts of his interactions with the rich and famous, scrapbooks of fan letters, and other odds and ends. Seifer manages the difficult task of balancing verifiable facts with deflating some of the more outlandish myths without diminishing Tesla’s present-day stature. . . . Compelling.” —Republican-American

“In his second book about Tesla, Marc Seifer once again breaks through the legend, the enigma, and the life and times of a man who brought more technical innovation to humanity than any other in history. This book is a treasure trove of never before published details about Tesla’s invention and his personal relationships with the celebrities, scientists and business moguls of the early twentieth century.” —Toby Grotz, Gaia Energy

“Memorable biographies uniquely combine rigorous research with lyrical, narrative storytelling that captures both the individual and the world they existed within. Seifer is a rigorous researcher, clearly having spent much of his adult life following Tesla’s trail. His innumerable quotes from Tesla, his associates (both scientific and social) and secondary-source material are exceptional.” —New York Journal of Books

“Marc Seifer is an excellent writer and scholar, who has produced a wonderfully readable and illuminating biography of one of the most intriguing men of this century...mak[ing] us understand not only the man, but also the times in which he lived....[A] masterpiece.” —Nelson DeMille

“Underneath the layers ... the core of Seifer’s book is a serious piece of scholarship.” —Scientific American

“Seifer's vivid, revelatory, exhaustively researched biography rescues pioneer inventor Nikola Tesla from cult status and restores him to his rightful place as a principal architect of the modern age.... Seifer provides the fullest account yet of Tesla.” —Publisher’s Weekly

“It is my opinion that Dr. Seifer leads the world as the most authoritative of all the Tesla researchers.” —J.W. McGINNIS, President, International Tesla Society