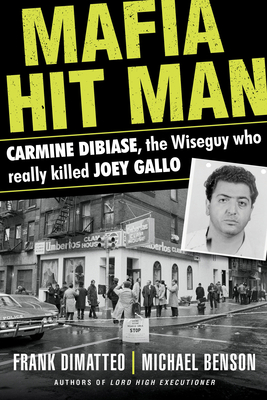 Who really killed “Crazy Joe” Gallo? At last, the truth can be told. And it wasn’t Frank “The Irishman” Sheeran as he claimed.

From acclaimed true-crime author Michael Benson and real-life "Mafia Survivor" Frank Dimatteo, the shocking and brutal story of Carmine DiBiase—aka Sonny Pinto—the elusive Mafia killer who went from small-time street punk to FBI’s Most Wanted list to Death Row—only to be released on the streets to kill and kill again…among those who died by his gun was Joey Gallo.


“Sober, he was nothing, but drunk he would blow your head off.” That’s how Pete the Greek described Carmine “Sonny” DiBiase, the Colombo crime family hitman who’d been terrorizing Manhattan’s Little Italy since he was a kid. After beating and robbing a local tailor and doing time in reformatory, Sonny set up operations at The Mayfair Boys Civic and Social Club, an illegal poolroom where he shot and killed his best friend on Christmas day...

A prime suspect of this and other crimes, Sonny went on the lam and off the grid for seven years. He then surrendered himself to police, was tried for murder and sentenced to death. But after a second trial, he walked away a free man—free to kill again.

Joey “Crazy Joe” Gallo and his President Street mob waged  a deadly Mafia civil war with the Colombo crime family, and in particular, Carmine “the Snake” Persico. A contract was put out for Gallo and his gang. And on that fateful night of April 7, 1972, in a Little Italy restaurant, Gallo was assassinated...by Carmine “Sonny” DiBiasi...

This is the true story of who really whacked Crazy Joey Gallo on that fateful night of April 7, 1972.

Frank Dimatteo is a lifelong Brooklynite, Mafia “survivor,” and publisher of Mob Candy magazine. He is the author of the acclaimed memoir, The President Street Boys: Growing Up Mafia, as well as Mob Candy’s Brooklyn Gangsters and Manhattan
Gangsters.

Michael Benson is the author of more than sixty books, including the true crime titles Betrayal in Blood, Killer Twins, and Mommy Deadliest. He also wrote Who’s Who in the JFK Assassination, and, most recently, The Devil at Genesee Junction. He regularly appears on ID: Investigation Discovery channel, including On the Case with Paula Zahn, and Deadly Sins. He is the recipient of the Academy of American Poets award.