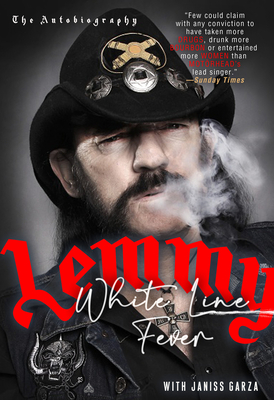 Now reissued for the first time since its original nearly 20 years ago, the bestselling autobiography of Motörhead singer and bassist Lemmy is the headbanging true story of a rock legend whose name was synonymous with notorious excess. White Line Fever offers a sometimes hilarious, often outrageous, highly entertaining ride with the frontman of the loudest rock band in history. Motörhead stand firm as conquerors of the rock world, their history spanned an incredible forty years and while the Motörhead line-up saw many changes, Lemmy was always the soul of the machine. In the words of drummer Mikkey Dee, "Lemmy was Motörhead."

Ian Fraser Kilmister was born on Christmas Eve, 1945. Learning from an early age that chicks really do appreciate a guy with a guitar, and inspired by the music of Elvis and Buddy Holly, Lemmy quickly outgrew his local bands in Wales, choosing instead to head to Manchester to experience everything he could get his hands on. And he never looked back.

Lemmy tripped through his early career with the Rocking Vicars, backstage touring with Jimi Hendrix, as a member of Opal Butterflies and Hawkwind. In 1975, he went on to create speed metal and form the legendary band Motorhead.

During their twenty-seven-year history, Motorhead has released 21 albums, been nominated for a Grammy, and conquered the rock world with such songs as "Ace of Spades," "Bomber," and "Overkill." Throughout the creation of this impressive discography, the Motorhead lineup has seen many changes, but Lemmy has always been firmly at the helm.

White Line Fever, a headbanging tour of the excesses of a man being true to his music and his pleasures, offers a sometimes hilarious, often outrageous, but always highly entertaining ride with the frontman of the loudest rock band in the world.

Lemmy Kilmister was born in Stoke-on-Trent. Having been a member of the Rocking Vicars, Opal Butterfly, and Hawkwind, Lemmy formed his own band, Motörhead. For the next 40 years, Lemmy led Motörhead through various lineups, countless world tours, over 20 studio albums, and more adventures than most rockers have in a dozen lifetimes. Motörhead's run lasted until just two months before Lemmy died at the age of 70 on December 28, 2015. His memorial service was held at the Rainbow, the oldest rock'n'roll bar in Hollywood.

Janiss Garza is an acclaimed writer and photographer. From 1989 to 1996 she was at the heart of the rock scene as senior editor for RIP, the world's premier hard music magazine at the time. Her music stories have also appeared in the Los Angeles Times, L.A. Weekly, Entertainment Weekly, and Yahoo Music. Currently she runs a small, award-winning press, FitCat Publishing.