Override: Discover Your Brain Type, Why You Do What You Do, and How to Do it Better (Hardcover) 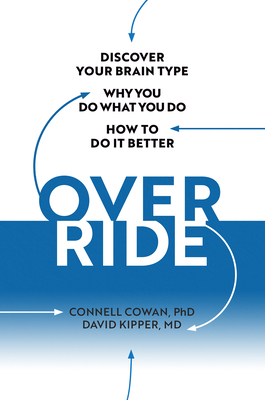 Why do we always seem to sabotage our best intentions? For anyone who’s experienced the power of habit and the difficulty of change, Override provides the science we need to take control of our own brains by identifying one of two  personality types. Based on today’s breakthrough science into neurotransmitters, Dr. Connell Cowan, NYT best-selling  author of Smart Women/Foolish Choices and Dr. David Kipper, co-host of ABC Radio’s nationally syndicated The  Medical Show gives readers the tools to recognize their own chemical imbalances, and what to do about them.

Think you already own your brain? Think again. Your brain owns you. It pushes you around and insists upon getting its way, not yours. Rather than having your best interests in mind, your brain has its own very specific agendas and strategies the purpose of which is singular—to make it feel good. It doesn’t care that its goals are often at stark variance with your intentions or what you know is healthy and constructive in your life. Your brain is selfish, demanding, and devious.

But it doesn’t have to be this way.

Override introduces a new two-pronged theory of personality: serotonin types and dopamine types. Based on today’s breakthrough science into neurotransmitters—the chemicals that transmit signals through our nervous system—Override show readers how to recognize their own chemical imbalances, and what to do about them.

One of the key parts of developing these strategies is understanding the ways serotonin and dopamine are supposed to work, and which type you fall under. Equipped with this new information, the reader will learn to recognize and reshape their reflexive behavior and develop intentional self-control. With this book, nobody is doomed to remain trapped by their natural tendencies!

Override details the struggles of people, both D- and S-Types, and show how together with them the authors found a path to change that can start this minute and last a lifetime. Complete with easy-to-use questionnaires, strategies, and exercises, this book offers micro and macro thinking on iconic human problems, backed up by the latest scientific research into why we are the way we are.

Dr. Connell Cowan is a clinical psychologist practicing in Los Angeles, California. He co-wrote Smart Women/Foolish Choices, a runaway bestseller that spawned an entire genre of books dealing with male/female dilemmas. The book spent nearly a year on the New York Times bestseller list, sold millions of copies, has been published in 23 different languages, and was made into a hit musical in Japan. His second book, Women Men Love/Women Men Leave, also became a NYT bestseller. Husbands & Wives completed the relationship trio. He has appeared on hundreds of radio and television shows and his writings have been published in a number of journals, magazines, and newspapers internationally.  Dr. Cowan also established the Human Sciences Center in Los Angeles––a non-profit center for research and treatment funded in part by a grant from the Eli Lilly Foundation. The innovative work he developed at the Center was featured on CBS’s “60 Minutes.”  He has taught at the California School of Professional Psychology and in UCLA’s School of Public Health. Along with his writings and clinical practice, Dr. Cowan has created and produced a number of television and video projects for syndication and cable blending both psychological information and drama.

Dr. David Kipper has practiced internal medicine in Los Angeles for over three decades. He has appeared as an expert commentator on all major networks, has produced numerous programs on health and health care, appeared on the Today Show, and contributes to the Huffington Post. Dr. Kipper is currently a co-host for ABC radio’s The Medical Show, a weekly national call-in show addressing all areas of medicine. After 12 years on the air The Medical Show will be syndicated to a wide national audience with podcasts and a web presence that advocates for patients seeking personalized solutions to complicated health problems. Dr. Kipper co-founded the Medical Group of Beverly Hills, the largest multidisciplinary healthcare provider in Los Angeles. He also co-founded the California Institute for Behavioral Medicine, a mind-body approach to managing stress, incorporating conventional and homeopathic therapies that Time Magazine described as “groundbreaking.”  Dr. Kipper’s 2010 book The Addiction Solution (Rodale Press, 2010) helped create a paradigm shift in the treatment of this disease from a behavioral malady to a chronic medical illness, determined by our unique brain chemistry and triggered by stress.