The Confidante: The Untold Story of the Woman Who Helped Win WWII and Shape Modern America (Hardcover) 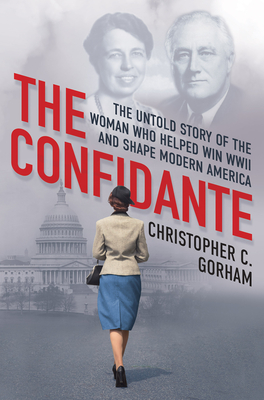 The first-ever biography of Anna Marie Rosenberg, a Hungarian Jewish immigrant with only a high school education who went on to be dubbed by Life Magazine “the most important woman in the American government.” Her life ran parallel to the front lines of history yet her influence on 20th century America, from the New Deal to the Cold War and beyond, has never before been told. For readers of Hidden Figures, A Woman of No Importance, and Eleanor: A Life, the previously unrecognized life of Anna Rosenberg is extraordinary, inspiring, and uniquely American.

As FDR’s special envoy to Europe in World War II she went where FDR couldn’t go. She was among the first Allied women to enter a liberated concentration camp, and stood in the Eagle’s Nest, Hitler’s mountain retreat days after it’s capture. She guided the direction of the G.I. Bill of Rights and the Manhattan Project. Though Anna Rosenberg emerged from modest immigrant beginnings, equipped with only a high school education, she was the real power behind national policies critical to America winning the war and prospering afterwards. Astonishingly, her story remains largely forgotten.

With a disarming mix of charm and Tammany-hewn toughness, Rosenberg began her career in public relations in 1920s Manhattan. She became friends with Eleanor Roosevelt, who recommended Anna to her husband, then running for Governor of New York. As FDR’s unofficial adviser, Rosenberg soon wielded enormous influence—no less potent for being subtle. Roosevelt dubbed her “my Mrs. Fix-It.”
Her extraordinary career continued after his death.

By 1950, she was tapped to become the assistant secretary of defense—the highest position ever held by a woman in the US military—prompting Senator Joe McCarthy to wage an unsuccessful smear campaign against her. In 1962, she organized JFK’s infamous birthday gala, sitting beside him while Marilyn Monroe sang. Until the end of her life, Rosenberg fought tirelessly for causes from racial integration to women’s equality to national healthcare.

More than the story of one remarkable woman, The Confidante explores who gets to be at the forefront of history, and why. Though she was not quite a hidden figure, Rosenberg’s position as “the power behind,” combined with her status as an immigrant and a Jewish woman, served to diminish her importance. In this inspiring, impeccably researched, and revelatory book, Christopher C. Gorham at last affords Anna Rosenberg the recognition she so richly deserves.

“One of the most influential women in the country's public affairs for a quarter of a century.” —The New York Times

Advance Praise for The Confidante

“Christopher Gorham’s authoritative new biography will put Anna Rosenberg where she belongs: among the most outstanding yet unsung women of the 20th century.” —Nigel Hamilton, author of the FDR at War trilogy and JFK: Reckless Youth

“Anna Rosenberg was a dynamo of a woman. Christopher C. Gorham's engaging and deeply researched biography The Confidante will leave you with two thoughts: ‘Why did I never hear of this woman before?’ and ‘Thank goodness she's been rescued from obscurity!’" —Kathryn Smith, author of The Gatekeeper: Missy LeHand, FDR and the Untold Story of the Partnership that Defined a Presidency and Gertie: The Fabulous Life of Gertrude Sanford Legendre: Heiress, Explorer, Socialite, Spy

“An outstanding narrative-driven debut that exemplifies why we read history in the first place. Anna Rosenberg's gripping saga should be read by anyone who enjoys a story of achieving success by overcoming long odds.” —Stephen Puleo, author of Dark Tide, The Caning, American Treasures, and Voyage of Mercy

“Rosenberg was a woman who rose to postings that were supposed to be the preserve of men, and she was a patriot who helped us win World War II and protect the home front. Heroine, indeed.” —Larry Tye, author of Demagogue: The Life and Long Shadow of Senator Joe McCarthy

"Gorham's biography is a must read for anyone interested in the FDR years and anyone concerned about current crises. The Confidante deserves a wide audience." —Andrew Kersten, author of Labor’s Home Front