Treasure of the Castilian or Spanish Language (Paperback) 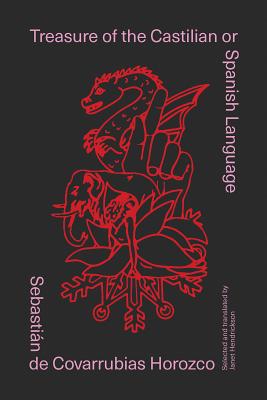 Longlisted for the PEN Poetry in Trnaslation Award

Sebastián de Covarrubias’s famous Treasure of the Castilian or Spanish Language was first published in 1611, only two years before the author’s death. A contemporary of Cervantes, learned in Hebrew and Arabic languages, Covarrubias wrote his encyclopedic dictionary to explore the heterogeneous origins of words and their hidden connections to the moral, transcendental, and everyday meanings of the world. Here, the translator Janet Hendrickson has dived deep into this influential, pre-Enlightenment text to cull a coherent, poetic selection of Covarrubias’s pioneering work.

Sebastián de Covarrubias Horozco (1539–1613) was a lexicographer and chaplain to Phillip II of Spain. His luminous Treasure is the first monolingual dictionary of the Spanish language.

Janet Hendrickson is the translator of The Future Is Not Ours, an anthology of Latin American writers born since 1970. She holds an MFA in nonfiction writing from the University of Iowa and is a PhD candidate in Romance Studies at Cornell.

Although, on the surface, a dictionary relies on definition and containment, Covarrubias’s volume compels modern readers because of its ongoing contradictions and inconsistencies.
— Public Books

A literary monument that appears exactly at the midpoint of the Spanish Golden Age.
— Studiolum