Songs from a Single Eye (Paperback) 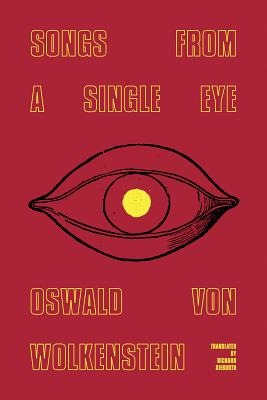 Longlisted for the PEN Poetry in Translation Award

The one-eyed singer, songwriter, and knight errant Oswald von Wolkenstein (surname literally “Cloud-Stone”) was among the last of the great troubadours. A contemporary of Villon, versed in Petrarch, and a Knight of the Holy Sepulchre, Wolkenstein was lost to history until scholarship in the 1970s recognized him as the German language’s first genuinely autobiographical lyric voice. In the hands of the magician-translator Richard Sieburth, working in the spirited tradition of Ezra Pound and Paul Blackburn, Wolkenstein’s verse rises from the page like a medieval Bob Dylan. Facsimiles of Wolkenstein’s musical compositions are included.

Oswald von Wolkenstein (1376/7–1445) is seen as one of the most important composer-versifiers of the German Renaissance, and for many years served as a diplomat and military commander to Emperor Sigismund.

The persona presented in these poems is erratic, self-deprecating, cantankerous and roguish.
— Times Literary Supplement