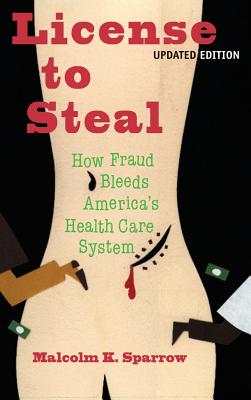 Who steals? An extraordinary range of folk -- from low-life hoods who sign on as Medicare or Medicaid providers equipped with nothing more than beepers and mailboxes, to drug trafficking organizations, organized crime syndicates, and even major hospital chains. In License to Steal, Malcolm K. Sparrow shows how the industry's defenses, which focus mostly on finding and correcting billing errors, are no match for such well orchestrated attacks. The maxim for thieves simply becomes "bill your lies correctly." Provided they do that, fraud perpetrators with any degree of sophistication can steal millions of dollars with impunity, testing payment systems carefully, and then spreading fraudulent billings widely enough across patient and provider accounts to escape detection. The kinds of highly automated, quality controlled claims processing systems that pervade the industry present fraud perpetrators with their favorite kind of target: rich, fast paying, transparent, utterly predictable check printing systems, with little threat of human intervention, and with the U.S. Treasury on the end of the electronic line. Sparrow picks apart the industry's response to the government's efforts to control this problem. The provider associations (well heeled and politically influential) have vociferously opposed almost every recent enforcement initiative, creating the unfortunate public impression that the entire health care industry is against effective fraud control. A significant segment of the industry, it seems, regards fraud and abuse not as a problem, but as a lucrative enterprise worth defending. Meanwhile, it remains a perfectly commonplace experience for patients or their relatives to examine a medical bill and discover that half of it never happened, or that; likewise, if patients then complain, they discover that no one seems to care, or that no one has the resources to do anything about it. Sparrow's research suggests that the growth of capitated managed care systems does not solve the problem, as many in the industry had assumed, but merely changes its form. The managed care environment produces scams involving underutilization, and the withholding of medical care schemes that are harder to uncover and investigate, and much more dangerous to human health. Having worked extensively with federal and state officials since the appearance of his first book on this subject, Sparrow is in a unique position to evaluate recent law enforcement initiatives. He admits the "war on fraud" is at least now engaged, but it is far from won.

Malcolm K. Sparrow teaches Regulatory and Enforcement Strategy, and Analytic Methods, at Harvard's John F. Kennedy School of Government. Formerly a Detective Chief Inspector with the British police service, he now specializes in issues of enforcement strategy, regulatory compliance, and risk control -- he is the acknowledged national expert on the subject of Health Care Fraud. He is author of The Risk Business: Defining the Regulatory Craft (2000), License to Steal: Why Fraud Plagues America's Health Care System (1996), Imposing Duties: Government's Changing Approach to Compliance (1994); and co-author of Beyond 911: A New Era for Policing (1990) and Ethics in Government: The Moral Challenge for Public Leadership (1990).