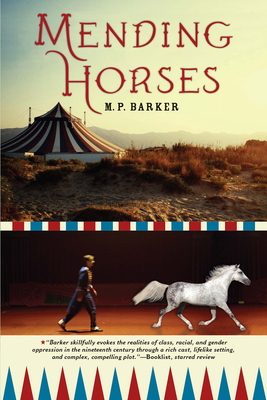 A poetic and critically acclaimed historical novel set in 1840s New England that touches on prejudice, dangerous secrets, and the true meaning of family.

Daniel Linnehan is an indentured servant no more. He has his papers, his beloved horse, Ivy, and a new direction in life. But in 1840s Massachusetts, a scruffy-looking Irish teenager wearing fine clothes and riding an even finer horse is asking for trouble. After innocent Daniel winds up beaten and in the constable's custody, the peddler Jonathan Stocking takes him under his wing.

Billy, a young boy also traveling with Mr. Stocking, is not thrilled that the two must work together in a traveling circus. And when Daniel realizes that Billy is actually a girl in disguise, pieces of Billy's troubled family life come to light. All too soon, past secrets catch up to them, bringing danger and heartache.

M. P. BARKER has more than two decades of experience as a historian, archivist, and writer. She has worked as a costumed historical interpreter at Old Sturbridge Village in Massachusetts where she got a firsthand taste of nineteenth century New England rural life by milking cows and mucking out barns, and she has been an archivist at the Connecticut Valley Historical Museum.

★ "Fluid writing and a true sense of history—including fascinating insights into early circuses—raise this well above the usual. Barker's characters are nuanced, difficult, and real, and so is her sense of horses. An absorbing look into a patch of past not often examined." —Kirkus Reviews, Starred Review

"Barker's deft sketches even endow most peripheral characters with individuality... Barker fashions a well-researched roster of circus eccentrics to serve as a colorful backdrop to Daniel's slow flowering as a horse trainer and Billy's pugnacious evolution towards contentment...The sideshow troupers, tragic childhoods, and near-fatal altercations—plus some gender disguise—could combine for a noisy novel, but Barker crafts a story of grace and strength." —School Library Journal