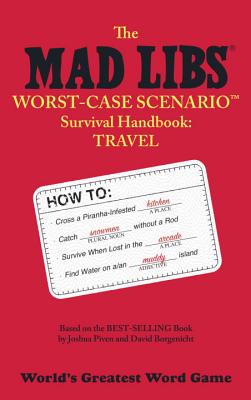 By Leonard Stern
$4.99
Not Available

What should you bring along for those long post-Armageddon hours when you have a wacky emergency, like how to survive when you're lost in a jungle or when you need to escape from a sinking car?  The Mad Libs®Worst-Case Scenario Survival HandbookTM: Travel, of course!  Based on the publishing phenomenon of the same name, The Mad Libs® Worst-Case Scenario Survival HandbookTM is sure to come in handy for any travel emergency!

Leonard Stern and Roger Price created Mad Libs ? inthe 1950s and the series has been a favorite among kids of allages ever since. Although Roger Price passed away in 1990, LeonardStern keeps the tradition alive by writing new Mad Libs? all the time.

Roger Price and Leonard Stern are both well known for their comedywriting. In the 1950s Roger Price created and developed cartoonscalled Droodles, which were turned into a television show.Before that Price worked with Bob Hope on a newspaper humor column,and he even appeared on Broadway in Tickets, Please!

Leonard Stern has an equally colorful and varied history. Beforeco-founding Price Stern Sloan with Roger Price (Sloan came later),Stern was a successful television writer. In addition to his creativeinvolvement with over twenty television series and over ten motionpictures, Stern worked with Jackie Gleason in New York writingthe Honeymooners. He also wrote for the Phil SilversShow, The Steve Allen Show, and wrote and producedthe original Get Smart television series. Recently, Sternpublished A Martian Wouldn't Say That, which compiled weirdand wacky memos written by people in the entertainment industry.Currently, Stern serves as a senior vice president of Price SternSloan, where he still writes those hilarious Mad Libs ?.copyright ? 2000 by Penguin Putnam Books for Young Readers. All rights reserved.