True Colors: The Real Life of the Art World (Paperback) 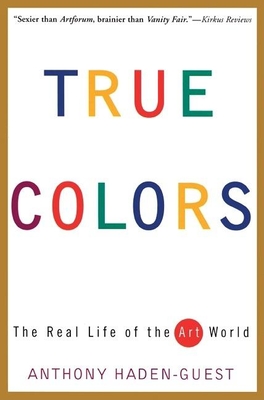 The last quarter century has been an extraordinary and turbulent period in the art world. It was a time of creative intensity during which a handful of artists, like Julian Schnabel, Jeff Koons, Keith Haring, and Jean-Michel Basquiat, managed, in their different ways, to cross over from the rarefied world of high art into popular culture. It was also a time when other promising careers and even whole movements, like Graffiti, spurted to life and then just as suddenly disappeared. During the astonishing boom years of the 1980s, the newly vigorous art market transformed the role of dealers and collectors to give them unprecedented power as tastemakers and the dangerous glamour of Hollywood power agents. And then came the bust.

Writer Anthony Haden-Guest has moved within the art world, known the players, and reported on the scene for this entire span of time. True Colors draws on two decades of reporting to deliver an authoritative and deliciously inside account of the contemporary art world that will be the most talked-about book on art since The Shock of the New.

Haden-Guest gives vivid portraits of the art world's key players and dramatizes the pivotal moments in the always evolving scene. Skillfully conveying a sense of the intricate geography of the art world, he tells of its clashes of ambition, its intrigues, its power plays. This is how artists survive, or don't survive. True Colors is filled with telling anecdotes and expertly told stories that cohere to give a sense of how the art world works, its current state, and where it may be going.