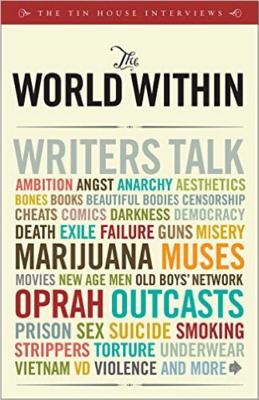 The World Within pulls aside the curtain on a variety of literary personalities and careers, presenting frank, funny, and informal discussions with Sherman Alexie, Francine Prose, George Saunders, Mark Strand, and others. Writers discuss craft, literary theft, dry spells, what they do besides writing, and more.

Michelle Wildgen is the author of the novel You’re Not You (St. Martin’s/Dunne). She is a senior editor at Tin House magazine, where she edits the Readable Feast and Blithe Spirits departments, and an editor at Tin House Books. Her writing has appeared in Best New American Voices 2004, Best Food Writing 2004, the anthology Death by Pad Thai, the journals StoryQuarterly, TriQuarterly, Prairie Schooner, Small Spiral Notebook, and elsewhere.

"Taken in isolation, each of these interviews (with only a few lackluster exceptions) acts as a stunning glimpse into a remarkable mind. Taken in their totality, the interviews begin to snick against each other until it seems that the authors are sparring in some marvelous palaver, and that you, lucky reader, are a bystander at the greatest literary dinner party ever held." -Nathan Ihara, LA Weekly "It's a collection of interviews with writers that has an impossibly long subtitle and an equally high number of quality interviews." -Jeff Baker, The Oregonian