The Lady of Souls (Paperback) 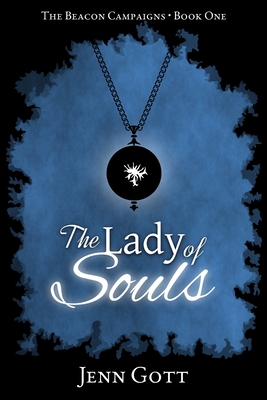 A woman banned from using magic. An errand boy with a secret past. A journey to the heart of death itself.

For Praxis Fellows, greatness has always been a given. But life doesn't always go according to plan, and now she finds herself half a world away from where she started. Banned from using magic, employed by the son of a railroad baron to realize a dead man's dreams, Praxis's life has become a sort of living death.

Kaedrich Mannly has never done anything of consequence. As the newest member of the household staff of Brindlewood Hall, his role is simple: stay out of sight and do as he's told. It's a far cry from the dreams of his childhood, when he and his twin would rule their imaginary kingdom in the forest, but even if he was brave enough to take on the hero's role these days, there's too much at stake for him to risk stepping out of his narrow comfort zone.

When a mysterious beast attacks the local village, both Praxis and Kaedrich end up with more than they bargained for. Soon they find themselves bound together on a quest to discover the source of a growing breach between the land of the living and the dead, on a journey that will take them far beyond the walls of their quiet lives-if they have the nerve to see it through. Because as they both soon realize, saving the world isn't quite the fate that they'd dreamed it would be.

Jenn Gott spent most of her childhood tromping through her parents' woods, and the rest of it making up fifty imaginary friends at a time. She has never let them go-these days they're just called "charactersm" and they spend more time on pages than in her head. She is still happiest living in the woods, with her programmer husband and their spoiled snuggle-cat.