The Beltway Beast: Stealing from Future Generations and Destroying the Middle Class (Paperback) 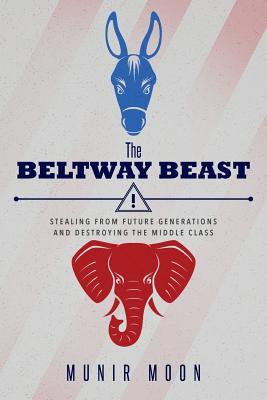 The Beltway Beast: Stealing from Future Generations and Destroying the Middle Class, transcends the anger and frustration of American people with their leaders failing to solve the country's problems. It documents our current reality and offers transformational ideas, such as shrinking the Presidential Primary process by utilizing technology, reducing healthcare cost through Smart Patient Credits, and using a Value Based Tax system that transfers power from Washington back to the states.

The Beltway Beast is an outsider's perspective of Washington D.C. and the paralyzing politics that have brought progress to a halt. This book offer new ideas to the problems that are suffocating America. Too often we accept the status quo instead of questioning why things are the way they are. For example, why is the working income taxed at a higher rate than the non-working income? Why do the majority of Americans who are independent have to choose only between Democrats and Republicans for the President of the United States? Why can't we reduce the cost of medical care so that it is affordable instead of relying on health insurance companies as the only solution?

The Beltway consists of Washington, D.C. and surrounding counties, and the Beast includes the Military-Industrial Complex, multinational corporations, foreign agents, lobbyists and Congress. The Beltway Beast is directed toward a system controlled by the Democrats and the Republicans representing the ghosts of the past with the Senate being made up of 80% men, 67% millionaires and an average age of 62 years. They govern in unison by piling up debt on our children, taxing the working income more than the non-working income, violating our privacy, and giving the illusion of security while keeping us on a perpetual war footing.

The Beltway Beast makes the case for a new mainstream political party that is fiscally responsible and socially compassionate. Only with new people and a new way of thinking a transformation is possible. Out of every crisis, there is an opportunity and The Beltway Beast offers that glimmer of hope.

Munir Moon is the author of two books. The Middle Class Comeback: Women, Millennials, and Technology Leading the Way, counters the negativity of the dominant narrative surrounding the past, present, and most importantly the future of the American middle class. It presents a hopeful blueprint for its revival with women, millennials, and technology being major factors while addressing the transformation of ever rising healthcare and education costs and taxes that adversely impact the middle class. The first book, The Beltway Beast: Stealing from Future Generations and Destroying the Middle Class, transcends the anger and frustration of American people with their leaders failing to solve the country's problems. It documents our current reality and offers transformational ideas, such as shrinking the Presidential Primary process by utilizing technology, reducing healthcare costs through Smart Patient Credits, and using a Value Based Tax system that transfers power from Washington back to the states. Moon spent 8 years in the financial industry, starting at Chase Econometrics and ending in the Savings and Loan Association during the 1980s. He was a first-hand observer of the financial crisis in the 80s, which resulted in the demise of the Savings and Loan industry to be repeated in 2008 in a different form. Moon is the president of Bertech, a Southern California-based small business that has been recognized three times as one of the top 500 fastest-growing small businesses by Inc. 500. Moon blogs at The Huffington Post and is a contributor to LAprogressive.com. He earned his B.S. in engineering, M.S. in economics and M.B.A. in finance from UCLA. He is married with three sons and lives in Los Angeles County, California.

"He marshals impressive statistical evidence in favor of his thesis that government aggrandizement has come at the expense of voter power. ...he offers a measured, serious diagnosis of today's political difficulties, coupled with a wealth of provocative potential solutions. ...An engaging critique that sees the two-party system as the source of the United States' political travails." - Kirkus Reviews

"Munir Moon succinctly states the purpose for his excellent, thoughtful book. ... I cannot over-stress the quality of Moon's research. ... This book needs to be not just read, not just shared, but acted upon immediately. The Beltway Beast is vital in these times." - San Francisco Book Review

"The Beltway Beast is a concise look at a litany of problems with the American political system. ... The book is well researched, filled with statistics. ... His tone of controlled, well-thought-out frustration and exasperation will resonate with many Americans, and this calm reasoning helps further the cause more effectively than rage." - Foreword Reviews

"I found The Beltway Beast and Munir Moon's wealth of statistical information to back up his dissertation a fascinating read that in many respects will confirm the people's view of the inefficiencies and ineffectiveness inherent in the current U.S. political and domestic systems." – Readers' Favorite