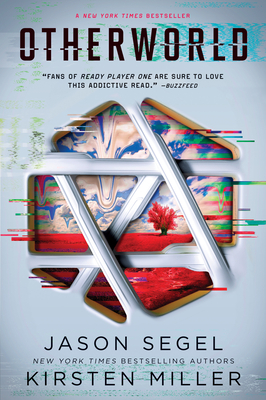 This is book number 1 in the Last Reality series.

“Full of high stakes, thrillers, and fantastic twists and turns, fans of Ready Player One are sure to love this addictive read.” —BuzzFeed

“A potent commentary on how much we’re willing to give up to the lure of technology.” —EW

"A fantastic journey from start to finish." —Hypable

New York Times bestselling authors Jason Segel and Kirsten Miller imagine a world in which you can leave your body behind and give in to your greatest desires in the first book in a fast-paced trilogy perfect for fans of the hit HBO show Westworld and anyone interested in the terrifying possibilities of the future of technology.

That’s how Otherworld traps you. It introduces you to sensations you’d never be able to feel in real life. You discover what’s been missing—because it’s taboo or illegal or because you lack the guts to do it for real. And when you find out what’s missing, it’s almost impossible to let it go again.

There are no screens. There are no controls. You don’t just see and hear it—you taste, smell, and touch it too. In this new reality, there are no laws to break or rules to obey. You can live your best life. Indulge every desire.

This is Otherworld—a virtual reality game so addictive you’ll never want it to end. And Simon has just discovered that for some, it might not.

The frightening future that Jason Segel and Kirsten Miller have imagined is not far away. Otherworld asks the question we'll all soon be asking: if technology can deliver everything we want, how much are we willing to pay?

Jason Segel is an actor, a writer, and an author. Segel wrote and starred in Forgetting Sarah Marshall and co-wrote Disney’s The Muppets, which won an Academy Award for Best Original Song. Segel’s film credits include The End of the Tour; I Love You, Man; Jeff Who Lives at Home; Knocked Up; and The Five-Year Engagement. On television, Segel starred on How I Met Your Mother as well as Freaks and Geeks. He is the coauthor of the New York Times bestselling Nightmares! series—Nightmares!; Nightmares! The Sleepwalker Tonic; Nightmares! The Lost Lullaby; and Everything You Need to Know About NIGHTMARES! and How to Defeat Them. Otherworld is his first novel for young adults. Follow Jason on Twitter at @JasonSegel.

Kirsten Miller lives and writes in New York City. She is the author of the acclaimed Kiki Strike books, the New York Times bestseller The Eternal Ones, and How to Lead a Life of Crime. Otherworld is the fifth novel Kirsten has written with Jason Segel. You can visit her at kirstenmillerbooks.com or follow @bankstirregular on Twitter.

“Full of high stakes, thrillers, and fantastic twists and turns, fans of Ready Player One are sure to love this addictive read.”—Buzzfeed

“A potent commentary on how much we’re willing to give up to the lure of technology.” —EW.com

"A fantastic journey from start to finish, and will keep your attention, long after you’ve put the book down."—Hypable.com

"Authors Jason Segel and Kirsten Miller keep the action nonstop while they convincingly ratchet up the tension…[in] the high-stakes gaming and intrigue of [Otherworld.]”—Shelf Awareness