Minority Leader: How to Lead from the Outside and Make Real Change (Hardcover) 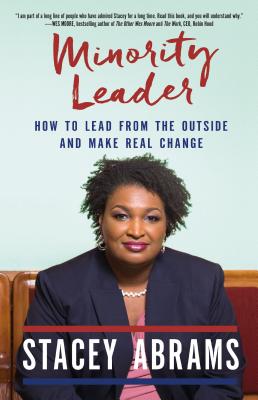 By Stacey Abrams
$28.00
Not Available

Minority Leader is a necessary guide to harnessing the strengths of being an outsider by Stacey Abrams, one of the most prominent black female politicians in the U.S.

Leadership is hard. Convincing others—and often yourself—that you possess the answers and are capable of world-affecting change requires confidence, insight, and sheer bravado. Stacey Abrams's Minority Leader is the handbook for outsiders, written with the awareness of the experiences and challenges that hinder anyone who exists beyond the structure of traditional white male power—women, people of color, members of the LGBTQ community, and millennials ready to make a difference.

In Minority Leader, Stacey Abrams argues that knowing your own passion is the key to success, regardless of the scale or target. From launching a company, to starting a day care center for homeless teen moms, to running a successful political campaign, finding what you want to fight for is as critical as knowing how to turn thought into action. Stacey uses her experience and hard-won insights to break down how ambition, fear, money, and failure function in leadership, while offering personal stories that illuminate practical strategies.

Stacey includes exercises to help you hone your skills and realize your aspirations. She discusses candidly what she has learned over the course of her impressive career: that differences in race, gender, and class are surmountable. With direction and dedication, being in the minority actually provides unique and vital strength, which we can employ to rise to the top and make real change.

Stacey Abrams is an author, serial entrepreneur, nonprofit CEO and political leader. After eleven years in the Georgia House of Representatives, seven as Minority Leader, Abrams became the 2018 Democratic nominee for Governor of Georgia, where she won more votes than any other Democrat in the state’s history. She has founded multiple organizations devoted to voting rights, training and hiring young people of color, and tackling social issues at both the state and national levels; and she is a lifetime member of the Council on Foreign Relations. Abrams is the 2012 recipient of the John F. Kennedy New Frontier Award and the first black woman to become the gubernatorial nominee for a major party in the United States.

"Abrams's own grit, coupled with her descriptions of much stumbling and self-doubt, will make Minority Leader touch you in a way few books by politicians can. In fact, the last one to manage it--biracial, the child of divorce, raised with little money by a single mother--became our 44th president." —The New York Times Book Review

"Stacey Abrams writes about her personal cocktail of grit and gumption, the one that could make her America's first black female governor if she wins her Georgia primary and election." —Glamour

"Although there are many books on networking and achieving political and entrepreneurial success, Abrams' is geared toward helping those who are on the fringes, especially African American women, find pathways to success and power....this is an excellent guide that addresses setbacks and pitfalls and identifies strategies to overcome them." —Booklist

“Stacey Abrams has everything you want in a candidate: a good legal mind, experience in governance, and a deep knowledge of poverty and hard work. If you read Minority Leader, you will discover she also has the superpowers of inspiring trust and knowing how to organize. You will have her as a friend, and you will want her as a governor.” —Gloria Steinem

“Minority Leader is a special book with a special mission: to push ALL people to know that their greatness and worthiness is a birthright. Stacey’s story is not just uplifting, but instructional as well. I am part of a long line of people who have admired Stacey for a long time. Read this book, and you will understand why.”
—Wes Moore, bestselling author of The Other Wes Moore and The Work, CEO, Robin Hood

“Stacey Abrams displays competence, confidence, and compassion in her assessment of the attributes and actions needed to deliver impact in today’s complicated world. Her commentary is as real as her commitment is remarkable. Minority Leader is both a motivational and a mechanical manual, offering an intense focus on opportunities and an unyielding path to mitigate obstacles. I enthusiastically commend this book as a resource for those who want to grow personally and professionally, as well as for those who seek to help guide that same growth.”
—Lisa M. Borders, WNBA President

"House Minority Leader for the Georgia General Assembly who’s now running for Georgia governor, Abrams won national acclaim for helping register voters of color in her state and getting business to recruit, train, and hire young people of color. Here, she shows readers from any marginalized population how to become their own advocates, proactively using their otherness while recognizing their fears. Not just local appeal; there are audiences out there that could really, really benefit from this book." —Library Journal

"Stacey understands what it is like to try and balance the everyday obligations of work and family, and Minority Leader offers a practical guide to pursuing meaningful work while acknowledging the myths of 'juggling it all.' All kinds of people face these challenges, but it can be more acute for women, people of color, members of the LGBTQ community, and others with 'outsider' status. This book is for anyone who has faced challenges while pursuing their passion, and helps people who are left out of traditional ladders to success build one for themselves." —Sherilyn Wright, Assistant to the International President, International Brotherhood of Electrical Workers

PRAISE FOR STACEY ABRAMS
“Stacey Abrams is a deeply compassionate and thoughtful leader who is always committed to fighting for justice for the Georgians she serves...Throughout her career, I have watched her work tirelessly to build coalitions to protect the poor and middle class, fight voter suppression, and register hundreds of thousands of people to vote. Stacey Abrams is the only leader in the race who has the experience and an ambitious vision to uplift all families in our state. Georgia must seize the opportunity to be a model for our nation by electing this transformative leader, who strives to empower the people she will serve.” —Congressman John Lewis

“Leaders like Stacey are the ones saying yes. America is changing, but there is no reason to fear the future.” —Jason Kander, former Missouri Secretary of State and President of Let America Vote

“She knows firsthand how opportunity is too often tied to a person’s race, gender and zip code.” —Kate Brown, Governor of Oregon

“She has a real mixture both of ideas, of really good guts, and of the ability to raise the funds necessary to execute the ideas…She’s really been able to harness her brains and her heart and her past experience in a way that gives people hope in Georgia,” —Jennifer Granholm, former Governor of Michigan

“In so many ways, the system wasn’t designed to be led by someone who looks like her,” —Jessica Byrd, Three Point Strategies

“Struggle is struggle. There is no rural or urban way to be poor—poor is poor. The key is to make sure everybody, no matter where they hail from, feels welcome. Leader Abrams will do that.” —Nina Turner, former Ohio State Senator