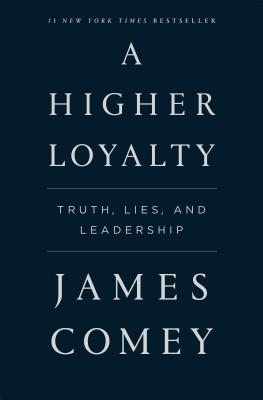 In his book, former FBI director James Comey shares his never-before-told experiences from some of the highest-stakes situations of his career in the past two decades of American government, exploring what good, ethical leadership looks like, and how it drives sound decisions. His journey provides an unprecedented entry into the corridors of power and a remarkable lesson in what makes an effective leader.

Mr. Comey served as director of the FBI from 2013 to 2017, appointed to the post by President Barack Obama. He previously served as U.S. attorney for the Southern District of New York, and the U.S. deputy attorney general in the administration of President George W. Bush. From prosecuting the Mafia and Martha Stewart to helping change the Bush administration's policies on torture and electronic surveillance, overseeing the Hillary Clinton e-mail investigation as well as ties between the Trump campaign and Russia, Comey has been involved in some of the most consequential cases and policies of recent history.

James Comey served as the seventh Director of the FBI, from 2013 until May 9, 2017, when he was fired by Donald Trump.

A Yonkers, New York native, Jim Comey attended the College of William and Mary and the University of Chicago Law School. After law school, Comey returned to New York and joined the U.S. Attorney’s Office for the Southern District of New York as an Assistant U.S. Attorney. There, he took on numerous crimes, most notably organized crime in the case of the United States v. John Gambino, et al. Afterwards, Comey became an Assistant U.S. Attorney in the Eastern District of Virginia, where he handled the high-profile case that followed the 1996 terrorist attack on the U.S. military’s Khobar Towers in Khobar, Saudi Arabia.

Comey returned to New York after 9/11 to become the U.S. Attorney for the Southern District of New York. At the end of 2003, he was tapped to be the Deputy Attorney General at the Department of Justice (DOJ) under then-U.S. Attorney General John Ashcroft and moved to the Washington, D.C. area.

After he was fired as FBI Director, Comey held the King Lecture Chair in Public Policy at Howard University for 2017-18 and served as a Distinguished Lecturer in Public Policy at William and Mary for 2018-2019. In September 2020, his first book, "A Higher Loyalty," was made into a Showtime limited series, "The Comey Rule."

“By far the most consequential book yet in the literature of the Trump presidency.” —NPR

“A Higher Loyalty is the first big memoir by a key player in the alarming melodrama that is the Trump administration....Comey’s book fleshes out the testimony he gave before the Senate Intelligence Committee in June 2017 with considerable emotional detail, and it showcases its author’s gift for narrative....Provides sharp sketches of key players in three presidential administrations....Comey is what Saul Bellow called a ‘first-class noticer.’” —The New York Times