The Education of Kendrick Perkins: A Memoir (Hardcover) 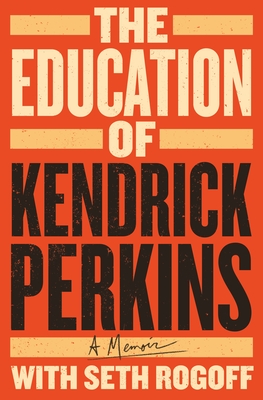 "Kendrick Perkins is the bold and educational voice we need today. Every single word he speaks will challenge, enlighten and encourage you to become a better version of yourself and see a better version of the world. Perkins' riveting stories about the NBA, his upbringing and social justice will make this book impossible to put down." -- Emmanuel Acho, New York Times bestselling author of Uncomfortable Conversations with a Black Man

Kendrick “Perk” Perkins is known for his blunt, opinionated, “carry the hell on” commentary on ESPN’s most popular shows. As a fourteen year NBA player and starting center for the 2008 NBA champion Boston Celtics, Perk earned a reputation as an enforcer, a fierce defender, and a great teammate. Now, In The Education of Kendrick Perkins, he opens a different side of himself: a powerful and intimate memoir that goes beyond basketball to discuss the reality of being Black in America.

Abandoned by his father, then orphaned after the murder of his mother, Perk was raised by his grandparents in a small Texas town. He left their home at age eighteen, drafted out of high school by the legendary Celtics. For a country boy, Boston was a completely new world, and the NBA a league of legends: Kobe Bryant, Lebron James, Kevin Garnett, James Harden, Shaquille O’Neal, Paul Pierce, Ray Allen, Kevin Durant, and more. Perk had to learn how to play with and against these stars, while adjusting to life on the road as a professional athlete.

But his education went beyond basketball. In this book, Perk reveals his awakening consciousness of larger issues that affected him, his fellow players, and Black Americans:
-How many NBA players grow up in broken families and difficult circumstances
-The history of slavery and how that trauma affects generations of Black life
-The truths told by writers including James Baldwin, Ralph Ellison, Richard Wright, and others
-The false myths about the Black family and fatherhood
-Why George Floyd’s murder forced a reckoning about race in America

Honest, fearless, dramatic, filled with stories about life on and off the court, The Education of Kendrick Perkins is a unique memoir that shows how he and we all can “carry the hell on.”

Kendrick “Perk” Perkins played fourteen years in the NBA and helped lead the Boston Celtics to their first NBA championship since the Larry Bird era. He is widely known as one of the greatest teammates in NBA history and a true star in his role. Since retiring from basketball, Perk has become one of the most unique, charismatic and provocative analysts in sports media. He appears on ESPN’s most popular shows, including NBA Today, NBA Countdown, First Take, and Get Up. He lives in Houston, Texas.

Seth Rogoff is a novelist, cultural critic, and professor of history and English at the University of Southern Maine, where he also teaches creative writing. He lives in Portland, ME.

"Kendrick Perkins is the bold and educational voice we need today. Every single word he speaks will challenge, enlighten and encourage you to become a better version of yourself and see a better version of the world. Perkins' riveting stories about the NBA, his upbringing and social justice will make this book impossible to put down." -- Emmanuel Acho, New York Times bestselling author of Uncomfortable Conversations with a Black Man

"It makes sense that the most exciting, authentic and knowledgeable basketball analyst in the world would create a stunning, revealing memoir. But I was still shocked at the wonder of this memoir. After reading The Education of Kendrick Perkins, you will understand why none of us should ever doubt the mind, nor the gumption of Kendrick Perkins ever again. It's hard to make a layered classic memoir and that's exactly what Kendrick Perkins has done. Though the book moves from region to region, Kendrick carries his south with him, and consistently interrogates himself, and the NBA. The book is flat out brilliant. Now carry the hell on."--Kiese Laymon, MacArthur award-winning author of Heavy

"From Beaumont to Boston and beyond, The Education of Kendrick Perkins takes the reader on a journey through Black history and Black social thought to give a unique perspective of what it is like for a Black man to make it in the NBA." --Louis Moore, author of We Will Win the Day: The Civil Rights Movement, the Black Athlete, and the Quest for Equality

"The Education of Kendrick Perkins makes clear our own miseducation. On the hardwood, Big Perk did what great Big Men do, he cleaned the glass. But in these pages, he does what great point guards do, he drops dimes, dishing highlight reel insights into the Black experience on and off the court. He leads us to truths too often obscured by racism. Truths about Jim Crow and the Great Migration; about training camp and game sevens; about fatherhood and fatherless sons; about teams and players we love and love to hate; about Black Power and Black Lives Matter; about the era of Jordan and the Age of Lebron. This is the book you need to carry on!" --Hasan Kwame Jeffries, author of Bloody Lowndes: Civil Rights and Black Power in Alabama’s Black Belt and host of the podcast Teaching Hard History

"The Education of Kendrick Perkins is a stone-cold miracle, one of those rare books that manages to combine an enthralling, insider’s account of life in the modern NBA with a daring exploration of what it means to be raised poor and black in America. Big Perk brings us onto the court and inside the locker room. But he also traces his story back to the roots of the African American experience, capturing the ancestral struggle to persevere amid slavery, migration, and a racism so entrenched that it infiltrates even the most gilded realms of athletic stardom. A thrilling ride and an astonishing achievement." --Steve Almond, author of Against Football and All the Secrets of the World

"Kendrick Perkins became a world champion as a professional basketball player because of his crushing defense and his relentless pursuit of excellence. Now, as a renowned ESPN figure who brings thrilling new meaning to the term color commentator, and in this bracing and brilliant memoir, Perkins displays a gift for blunt truth and unsparing analysis that matches his dominance on the court. Whether addressing his rise to prominence from humble roots, or the racial crises that plague our national landscape, The Education of Kendrick Perkins offers acute insight in his trademark folksy manner that translates abstract moral principles into compelling common sense. This book is a refreshing departure from the politically correct reflections of most sports stars to reveal the heart and passions of a beautiful and honest man. "--Michael Eric Dyson, Vanderbilt professor and author of Entertaining Race

“[O]ne of the NBA’s most intimidating enforcers and also one of its most compassionate and legendary teammates.” — ESPN Press Room

"Perk is probably one of the last of the old school vets that learned from the older guys in the way of giving back to the young guys... You see that big scowl on his face, he looks all mean on the court, but off the court, all his teammates love him." — Paul Pierce, Celtics forward, Sports Illustrated

"[Perk is] charismatic, engaging and blunt...[with a] willingness to be candid and critical of players who not so long ago were peers." — Boston.com