Sonic Boom: The Impossible Rise of Warner Bros. Records, from Hendrix to Fleetwood Mac to Madonna to Prince (Hardcover) 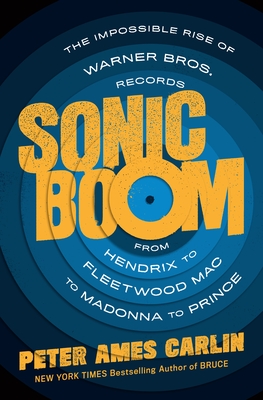 By Peter Ames Carlin
$33.59
Not Available

Stories about Warner Brothers, the most successful record label ever. Amongst the greats included are Jimi Hendrix, Fleetwood Mac, Madonna and Prince.

From journalist Peter Ames Carlin, Sonic Boom captures the rollicking story of the most successful record label in the history of popular music, Warner Bros. Records, and the remarkable secret to its meteoric rise.

The roster of Warner Brothers Records and its subsidiary labels reads like the roster of the Rock & Roll Hall of Fame: Jimi Hendrix, the Grateful Dead, Joni Mitchell, Neil Young, James Taylor, Fleetwood Mac, the Eagles, Prince, Van Halen, Madonna, Tom Petty, R.E.M., Red Hot Chili Peppers, and dozens of others. But the most compelling figures in the Warner Bros. story are the sagacious Mo Ostin and the unlikely crew of hippies, eccentrics, and enlightened execs. Ostin and his staff transformed an out-of-touch company, revolutionized the industry, and, within just a few years, created the most successful record label in the history of the American music industry.

How did they do it? One day in 1967, the newly tapped label president Mo Ostin called his team together to share his grand strategy: he told them to stop trying to make hit records/

"Let’s just make good records and turn those into hits.”

With that, Ostin ushered in a counterintuitive model that matched the counterculture. His offbeat crew recruited outsider artists and gave them free rein, while rejecting out-of-date methods of advertising, promotion, and distribution. And even as they set new standards for in-house weirdness, the upstarts’ experiments and innovations paid off, to the tune of hundreds of legendary hit albums.

Warner Bros Records conquered the music business by focusing on the music rather than the business. Their story is as raucous as it is inspiring—pure entertainment that also maps a route to that holy grail: love and money.

Peter Ames Carlin is a writer and the bestselling author of several books, including Homeward Bound: The Life of Paul Simon and Bruce, the biography of Bruce Springsteen. Carlin has also been a free-lance journalist, a senior writer at People in New York City, and a television columnist and feature writer at The Oregonian in Portland. A regular speaker on music, writing, and popular culture, Carlin lives in Portland, Oregon.

"Captivating. . . . What makes Sonic Boom so appealing is that it is actually three books in one. It’s a book about how music is made, but it’s also a book about how companies are run and then go off track. It’s also a biography of sorts of Mo Ostin."
- Wall Street Journal

“There will never be another record company quite like Warner Bros Records . . . an enterprise that so inhabits the culture of the moment, introducing a mass audience to the cream of current innovation and becoming both a commercial and artistic titan. . . . Sonic Boom does justice to the label's accomplishments."
- Financial Times

"Music journalist Carlin (Bruce) relays in his characteristic colorful style how music mogul Mo Ostin built Warner Bros. Records into an industry leader... Those looking for a gossipy tell-all won’t find one here; Ostin stuck with a formula, trusted and invested in his artists, took the music seriously, and honored the intelligence and taste of his customers. This brisk portrait of the man who made Warner Bros. into a powerhouse offers essential reading on the business and history of popular music."
– Publishers Weekly

"[Mo] Ostin and his cowboys rode off into a sunset that grows ever darker as the record business declines, but Carlin captures their glory days without sentimentality or untoward nostalgia. ... Fans of LP–era rock will enjoy Carlin’s knowledgeable deep dive."
- Kirkus Reviews

"Having already penned definitive biographies of America’s musical titans, from Springsteen to Simon, Peter Ames Carlin turns his keen eye to the history of the country’s preeminent record executive and label in Sonic Boom, the story of Mo Ostin and Warner Bros. With this compellingly shaped, finely etched portrait of a company and a culture that would produce some of the most crucial music of our times, Carlin again shows why he’s the absolute master of his craft."
– Bob Mehr, author of the New York Times best seller Trouble Boys: The True Story of the Replacements

“Peter Ames’ Carlin’s rollicking Sonic Boom is an endlessly juicy and entertaining account of a time when excess and indulgence (chimps on tricycles!) went hand in hand with artistic freedom and hands-off corporate support. It will make you mourn a wild-west industry that no longer exists—but inspire you to reach for classic WB albums by Randy Newman, Bonnie Raitt, Joni Mitchell, and Neil Young to celebrate that extraordinary time and company.”
– David Browne, author of Crosby, Stills, Nash & Young: The Wild, Definitive Saga of Rock’s Greatest Supergroup

“A sweeping and vital music history that stretches from Hendrix and the Kinks to Prince, Madonna and R.E.M., written by a rock geek with an eye for storytelling. . . Carlin writes with authority, joy and detail. Sonic Boom will make you pine for a time when true artists were supported, whether they sold 50 albums or 5 million.”
– Geoff Edgers, The Washington Post

"Carlin chronicles this unusual bit of popular music history in a breezy and irreverent style, a perfect match for the story, and seems almost to disbelieve that such a record company once existed. An entertainingly informative read."
- Booklist

"Carlin’s spring-loaded narrative keeps the reader involved, and characterizing the empathetic side of some of the outsize personalities humanizes the Warner mythos."
- Library Journal