The Saint of Bright Doors (Hardcover) 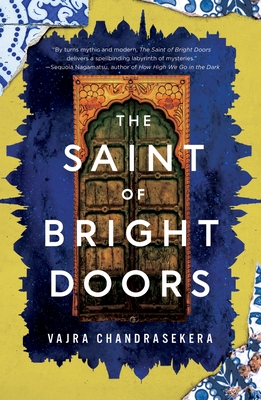 The Saint of Bright Doors sets the high drama of divine revolutionaries and transcendent cults against the mundane disappointments of modern life, resulting in a novel that is revelatory and resonant.

Fetter was raised to kill, honed as a knife to cut down his sainted father. This gave him plenty to talk about in therapy. He walked among invisible powers: devils and anti-gods that mock the mortal form. He learned a lethal catechism, lost his shadow, and gained a habit for secrecy. After a blood-soaked childhood, Fetter escaped his rural hometown for the big city, and fell into a broader world where divine destinies are a dime a dozen.

Everything in Luriat is more than it seems. Group therapy is recruitment for a revolutionary cadre. Junk email hints at the arrival of a god. Every door is laden with potential, and once closed may never open again. The city is scattered with Bright Doors, looming portals through which a cold wind blows. In this unknowable metropolis, Fetter will discover what kind of man he is, and his discovery will rewrite the world.

Vajra Chandrasekera is from Colombo, Sri Lanka. He has published over fifty short stories in magazines and anthologies including Analog, Black Static, and Clarkesworld, among others, and his short fiction has been nominated for the Theodore Sturgeon Memorial Award. He blogs at vajra.me and is @_vajra on Twitter.

“By turns mythic and modern, The Saint of Bright Doors delivers a spellbinding labyrinth of mysteries...A hypnotic and intricate debut.” —Sequoia Nagamatsu, bestselling author of How High We Go in the Dark

“I've never seen a fantasy world like this, and I've never met a hero like Fetter. Both will haunt me for a long, long time. Keeps on dropping bombs and surprises and brilliance and heartbreak to the very end.” —Sam J. Miller

“A book that explores how marvellously and brutally humanity remakes the world.” —Indrapramit Das, author of The Devourers

“Riveting, surreal, clever and wise and all-too real—a breathtaking achievement.” —Max Gladstone, Hugo and Nebula-Award winning author of This Is How You Lose the Time War

“Layered, lush and lyrical, at once wholly original and unmistakably South Asian. A fascinating debut from a thunderous talent.” —Samit Basu, author of The City Inside

“By turns mythic and modern, The Saint of Bright Doors delivers a spellbinding labyrinth of mysteries...A hypnotic and intricate debut.” —Sequoia Nagamatsu, bestselling author of How High We Go in the Dark

“The Saint of Bright Doors will slip a knife into you the way only the best literature does. It’s the kind of book that makes you a better thinker and a better feeler, even if it’s at the cost of making you a little more haunted.” —Natalia Theodoridou, World Fantasy Award-winning author

“Weirder than Miéville, as deeply humane and philosophical as Le Guin, The Saint of Bright Doors is a tale of belief and myth and story and grief layered with the dense, brilliant luminosity of an oil painting.” —Premee Mohamed