Upon A Burning Throne (The Burnt Empire) (Hardcover) 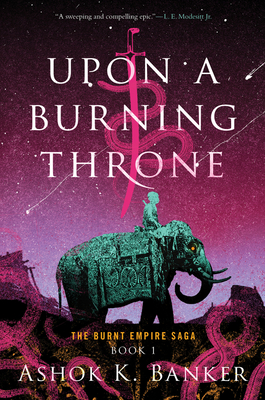 From international sensation Ashok K. Banker, pioneer of the fantasy genre in India, comes the first book in a groundbreaking, epic fantasy series inspired by the ancient Indian classic, The Mahabharata

In a world where demigods and demons walk among mortals, the Emperor of the vast Burnt Empire has died, leaving a turbulent realm without an emperor. Two young princes, Adri and Shvate, are in line to rule, but birthright does not guarantee inheritance, for any successor must sit upon the legendary Burning Throne and pass The Test of Fire. Imbued with dark sorceries, the throne is a crucible—one that incinerates the unworthy.

Adri and Shvate pass The Test and are declared heirs to the empire . . . but there is another with a claim to power, another who also survives: a girl from an outlying kingdom. When this girl, whose father is the powerful demonlord Jarsun, is denied her claim by the interim leaders, Jarsun declares war, vowing to tear the Burnt Empire apart—leaving the young princes Adri and Shvate to rule a shattered realm embroiled in rebellion and chaos . . .

Welcome to the Burnt Empire Saga

ASHOK K. BANKER is the author of more than seventy books, including the internationally acclaimed Ramayana series. Their works have all been bestsellers in India and have sold around the world. They live in Southern California.

"Upon A Burning Throne is a tale told with masterful control over the narrative. The pace never slackens and the story is never offered up at the altar of world-building details. Upon A Burning Throne is undoubtedly a compelling read—it is one of those 'on-the-edge-of-your-seat' novels which keeps the reader hooked on right till the end. I would, therefore, recommend it to all lovers of fiction.” — A Hindu's View