Eligible: A Modern Retelling of Pride and Prejudice (Hardcover) 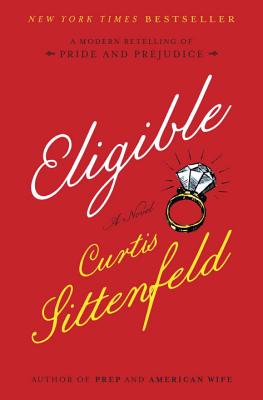 By Curtis Sittenfeld
$28.00
Not Available

“It is a universally acknowledged truth that a retelling of Pride and Prejudice must be cleverly written and wickedly funny. Sittenfeld has accomplished that and more with her fantastic new novel. The Bennet sisters have been transported to modern day Cincinnati. Jane is a yoga instructor; Liz, a writer for a women's magazine; Lydia and Kitty do nothing but work out; and Mary spends most of her time in her room. The two older sisters live in New York, but have come home to check on Mr. Bennet, who is recovering from a heart attack. The storyline is one that will be familiar to most Austen readers, but with some extremely funny twists.”
— Sharon Nagel (M), Boswell Book Company, Milwaukee, WI

NEW YORK TIMES BESTSELLER - Wonderfully tender and hilariously funny, Eligible tackles gender, class, courtship, and family as Curtis Sittenfeld reaffirms herself as one of the most dazzling authors writing today. NAMED ONE OF THE BEST BOOKS OF THE YEAR BY NPR AND THE TIMES (UK)

This version of the Bennet family--and Mr. Darcy--is one that you have and haven't met before: Liz is a magazine writer in her late thirties who, like her yoga instructor older sister, Jane, lives in New York City. When their father has a health scare, they return to their childhood home in Cincinnati to help--and discover that the sprawling Tudor they grew up in is crumbling and the family is in disarray. Youngest sisters Kitty and Lydia are too busy with their CrossFit workouts and Paleo diets to get jobs. Mary, the middle sister, is earning her third online master's degree and barely leaves her room, except for those mysterious Tuesday-night outings she won't discuss. And Mrs. Bennet has one thing on her mind: how to marry off her daughters, especially as Jane's fortieth birthday fast approaches. Enter Chip Bingley, a handsome new-in-town doctor who recently appeared on the juggernaut reality TV dating show Eligible. At a Fourth of July barbecue, Chip takes an immediate interest in Jane, but Chip's friend neurosurgeon Fitzwilliam Darcy reveals himself to Liz to be much less charming. . . . And yet, first impressions can be deceiving. Praise for Eligible

"Even the most ardent Austenite will soon find herself seduced."--O: The Oprah Magazine "Blissful . . . Sittenfeld modernizes the classic in such a stylish, witty way you'd guess even Jane Austen would be pleased."--People (book of the week) " A] sparkling, fresh contemporary retelling."--Entertainment Weekly " Sittenfeld] is the ideal modern-day reinterpreter. Her special skill lies not just in her clear, clean writing, but in her general amusement about the world, her arch, pithy, dropped-mike observations about behavior, character and motivation. She can spot hypocrisy, cant, self-contradiction and absurdity ten miles away. She's the one you want to leave the party with, so she can explain what really happened. . . . Not since Clueless, which transported Emma to Beverly Hills, has Austen been so delightedly interpreted. . . . Sittenfeld writes so well--her sentences are so good and her story so satisfying. . . . As a reader, let me just say: Three cheers for Curtis Sittenfeld and her astute, sharp and ebullient anthropological interest in the human condition."--Sarah Lyall, The New York Times Book Review "A clever, uproarious evolution of Austen's story."--The Denver Post "If there exists a more perfect pairing than Curtis Sittenfeld and Jane Austen, we dare you to find it. . . . Sittenfeld makes an already irresistible story even more beguiling and charming."--Elle "A playful, wickedly smart retelling of Jane Austen's Pride and Prejudice."--BuzzFeed "Sittenfeld is an obvious choice to re-create Jane Austen's comedy of manners. She] is a master at dissecting social norms to reveal the truths of human nature underneath."--The Millions

"A hugely entertaining and surprisingly unpredictable book, bursting with wit and charm."--The Irish Times "An unputdownable retelling of the beloved classic."--PopSugar

Curtis Sittenfeld is the bestselling author of the novels Prep, The Man of My Dreams, American Wife, and Sisterland, which have been translated into twenty-five languages. Her nonfiction has been published widely, including in The New York Times, The Atlantic, Time, and Glamour, and broadcast on public radio's This American Life. A native of Cincinnati, she currently lives with her family in St. Louis.