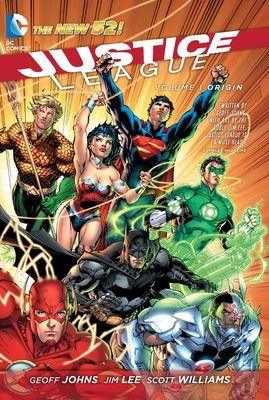 In a world where inexperienced superheroes operate under a cloud of suspicion from the public, loner vigilante Batman has stumbled upon a dark evil that threatens to destroy the earth as we know it. Now, faced with a threat far beyond anything he can handle on his own, the Dark Knight must trust an alien, a scarlet speedster, an accidental teenage hero, a space cop, an Amazon Princess and an undersea monarch. Will this combination of Superman, The Flash, Cyborg, Green Lantern, Wonder Woman and Aquaman be able to put aside their differences and come together to save the world? Or will they destroy each other first?

As a part of the monumental DC Comics' The New 52 event, comics superstars Geoff Johns and Jim Lee bring you an all-new origin story for the Justice League! This powerhouse creative team re-imagines the classic heroes of the DC Universe for the 21st century. This volume collects issues #1-6 of Justice League.

This indelible recasting of the World’s Greatest Heroes has only grown in stature as the years have worn on, with fans everywhere gaining a greater and greater appreciation for this masterwork in the genre. Justice League Vol. 1: Origin has come to be emblematic of the word “Essential”.

Geoff Johns is an award-winning writer and one of the most popular contemporary comic book writers today. Johns is the author of The New York Times bestselling graphic novels Aquaman: The Trench, Blackest Night, Green Lantern: Sinestro Corps War, Justice League: Origin, Superman: Brainiac and Batman: Earth One which hit #1 on the bestseller list. He is also known for transforming Green Lantern into one of the most critically and commercially successful franchises in comics.

Johns was born in Detroit and studied media arts, screenwriting, and film at Michigan State University. After moving to Los Angeles, he became an assistant to Richard Donner, director of Superman: The Movie. He and his mentor Donner later co-wrote Superman: Last Son featuring the return of General Zod.

Johns has written for various other media, including episodes of Smallville, Arrow and Adult Swim’s Robot Chicken, for which he was nominated along with his co-writers for an Emmy. He is the Chief Creative Officer of DC Entertainment and resides in Los Angeles, California.

“Writer Geoff Johns and artist Jim Lee toss you--and their heroes--into the action from the very start and don't put on the brakes. DC's über-creative team craft an inviting world for those who are trying out a comic for the first time. Lee's art is stunning.” —USA Today

“Welcoming to new fans looking to get into superhero comics for the first time and old fans who gave up on the funny-books long ago.... Written by Geoff Johns, with art by the godly Jim Lee, Justice League is a must read.” —Complex Magazine

“I don't care that he doesn't have red trunks, and I don't care that his suit has a few pointless lines on it to make it look sort of armorish instead of tightsy. I don't even care that there's no spitcurl, but just an approximation of one. He's still Superman and he's still great.” —Crave Online